The Future Of "Education"

Sneak preview: it isn't good.
America once was the land of innovation. Most of the technological innovations we all take for granted came from the U.S. We dominate the list of Nobel prize laureates... 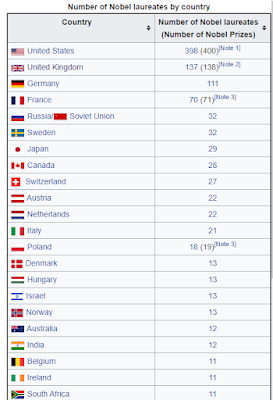 More than double the next closest nation. The list does include nonsense awards like literature and the "peace prize" but you get the idea. We invented lots of stuff.
You have to go down to number 19 on the list to find the first nation that is not majority White, Asian or Jewish, and that would be India with 12 laureates and of those a couple are Peace prizes and at least two are White guys living in India. The first African nation on the list comes in at 22 with South Africa and 11 laureates. Of the 11 South African laureates, all but three are White and the three that are black are all Peace prize winners. I took the time to check further and there have been a grand total of 17 blacks awarded a Nobel prize ever in the 121 years the Nobel prize has been awarded and of those only one, W. Arthur Lewis of St. Lucia, received a prize for economics that he shared with a White guy named Theodore Schultz. Of the other 16 blacks laureates, 4 laureates are in literature and the other 12 are "Peace" prizes including former President Barack Obama who was awarded the prize for being black and spent his presidency ordering drone strikes.
You might also notice that we don't seem to be inventing a lot of new stuff. Mostly we improve on existing stuff. The internal combustion engine that runs most of our vehicles has been around since 1860 in various forms, it is a lot better now obviously but the principle is the same. Our phones are more and more complex but really just build on older technology. The first Blackberry came out in 1999. The internet gets faster and faster, those of us who remember the pain of downloading a song on Napster and it taking hours and hours while we can now stream multiple music platforms on demand simultaneously understand just how much faster it is but again it is the same technology, just improved upon.
There are still new inventions of course but it certainly seems that the major focus has shifted to improving consumer technology instead of creating anything new.
Does any reasonable person think this is going to change?
If you are one of the optimistic few, take a gander at this story from Chicagoland: 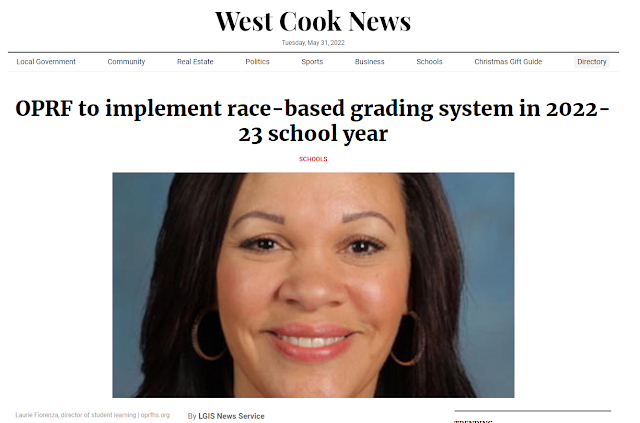 This is the inevitable next step. Having failed to close the achievement gap between White and Asian students and black and mestizo students, now this school system will have to overtly grade differently based on race. According to the school district website, the student body at Oak Park and River Forest High School (OPRF) is about half White, almost 20% black and 13% mestizo plus nearly 10% of mixed race.

Ten years ago the White percentage was about the same but the black percentage was over 28%. The difference in the last ten years is found in the mestizo student population going from 5.5% in 2010-2011 to over 13% in 2022-2022. According to the linked article, the achievement gap at OPRF is enormous:
According to the Illinois State Board of Education, 38 percent of OPRF sophomore students taking the Scholastic Aptitude Test (SAT) failed.
The OPRF failure rate was 77 percent for black students, 49 percent for Hispanics, 27 percent for Asians and 25 percent for whites.
Over three quarters of black students at this school can't pass a basic sophomore academic competency exam. What is being proposed is so mind-boggling stupid that it sounds like something from the Babylon Bee but it is not satire. Emphasis in red mine.
In an effort to equalize test scores among racial groups, OPRF will order its teachers to exclude from their grading assessments variables it says disproportionally hurt the grades of black students. They can no longer be docked for missing class, misbehaving in school or failing to turn in their assignments, according to the plan.
“Traditional grading practices perpetuate inequities and intensify the opportunity gap,” reads a slide in the PowerPoint deck outlining its rationale and goals.
It calls for what OPRF leaders describe as “competency-based grading, eliminating zeros from the grade book…encouraging and rewarding growth over time.”
If you don't turn in your assignment, that cannot be counted against you in grading? WTF?! Why would a kid do his homework or book report or whatever if it doesn't matter to your grades if you do or don't? I know I sure as hell wouldn't have completed most assignments if it didn't matter if I did or not.
There is more from the article.
Advocates for so-called "equity based" grading practices, which seek to raise the grade point averages of black students and lower scores of higher-achieving Asian, white and Hispanic ones, say new grading criteria are necessary to further school districts' mission of DEIJ, or "Diversity, Equity, Inclusion and Justice."
"By training teachers to remove the non-academic factors from their grading practices and recognize when personal biases manifest, districts can proactively signal a clear commitment toward DEIJ," said Margaret Sullivan, associate director at the Education Advisory Board, which sells consulting services to colleges and universities.
Sullivan calls grading based on traditional classroom testing and homework performance “outdated practices” and foster "unconscious biases."
So how are you supposed to grade student performance if you can't rely on tests and assignments? Why you simply use "non-academic factors" like actually completing your assignment and instead rely on "growth" and if that fails simply use the old Family Guy color chart to determine if a student deserves a higher or lower grade. 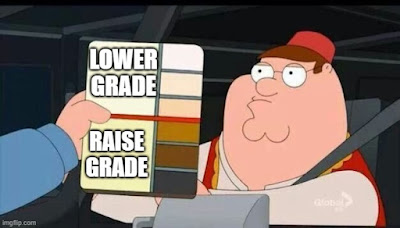 It also sure sounds like they are going to downgrade White and Asian students to make their grades artificially lower at the same time they are inflating the grades of blacks and mestizo students.
What kind of future employees are they creating if they deemphasize actually completing the tasks assigned to you?
The broad they are quoting from in the paragraphs above, Margaret Sullivan of the "Education Advisory Board" is a late 20s bimbo who is maybe mildly attractive if you have 4-5 beers in you. 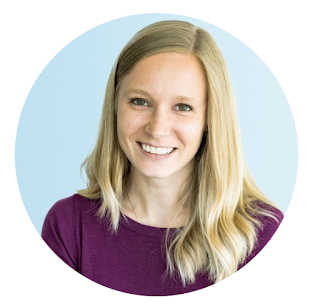 She graduated with her undergrad degree from Notre Dame in 2015 and then her Master of Education degree in 2017, so all of five years ago. Her extensive experience in education includes a couple of years as a "teaching fellow" for AmeriCorps, probably wiping out her student loan debt, while working on her M. Ed.  then two years as a fifth grade teacher in Catholic schools in the ritzy Arlington, Virginia diocese outside of D.C.. She went right from there to this "Education Advisory Board" where she has worked in a cubicle for almost three years.
Yep, she is clearly an expert on the issue of education after a whopping four years of teaching experience but here she is declaring that we should stop grading students based on their performance. What could possible go wrong? The article being quoted above tells the deeper story

This is all about grade inflation for black and mestizo kids so they can get into college, which is also why so many schools are moving to ditch the SAT/ACT tests.
What this means is that in the future, White and Asian students will continue to be passed over for college admission spots, especially at elite universities, in favor of black and mestizo students who are academically unqualified.
Overtly penalizing White and Asian students who are higher achievers and have greater intellectual potential in favor of black and mestizo students who only serve to pad the universities' " diversity, equity, inclusion, and justice" numbers and provide more non-White students for pictures in promotional materials means will accelerate the decline in our national intellectual ability, a decline already at high speed thanks to low White and Asian birthrates and mass immigration. In 2019 the Brookings Institution gleefully proclaimed the delightful news:
Less than half of US children under 15 are white, census shows
For the first time, non-Hispanic white residents now make up less than half (49.9%) of the nation’s under age 15 population, newly released 2018 U.S. Census Bureau estimates show. The new data highlight the increasing racial diversity of the nation’s overall population, for which non-Hispanic whites now comprise only slightly more than three-fifths (60.4%) of all residents. But the fact that white children under 15 have already become a minority in their age group puts an exclamation point on the fact that the nation’s diversity is percolating from the “bottom up” as the white population ages. This phenomenon, which is projected to continue, emphasizes the need for institutions that focus on children and young families to proactively accommodate the interests of more racially diverse populations, as the latter will be key players in the country’s demographic and economic future.
This is supposed to be a good thing, maybe the best thing ever, but it comes with some obvious issues like America getting rapidly dumber with each passing year while also growing increasingly violent.
What this portends for the future is a nation that innovates less, is less intelligent and less creative. It means that our days as the innovation engine of the world are coming to a close and it would have already closed if it were not for the fact that most of the rest of the world is even less White than we are and therefore already way ahead of us in the race to the bottom of the IQ chart. We are rapidly approaching the stage where the current population will be too stupid to maintain the engineering of society that prior generations built and when that happens, chaos will follow closely behind accompanied by famine, (real) pandemics and unimaginable bloodshed.
Holding down White and Asian students to make black and mestizo students (and of course White liberals) feel better about themselves. That is the future of our once great educational system.
Posted by Arthur Sido at 12:45 PM