That Sound You Hear?

Is the last bit of plausibility in the argument for only allowing the police to have guns. 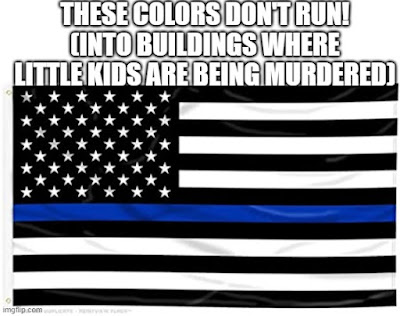 The school shooting in Uvalde is quickly shifting from being about the shooter and more about the response from local cops, or more specifically the utter lack of a response. Various reports indicate that nearly an hour lapsed between the time cops were dispatched and the shooter was neutralized, and not even by the local PD but by a random Border Patrol agent who used a borrowed shotgun from the barber who was cutting his hair when he heard about the shooter.
While I am not sure what all transpired, it does seem like the cops are acting a bit guilty and defensive. When kids act that way, it is a sure sign they did something wrong. I assume the same is true here. What is worse are the pictures and accounts of parents being forcibly restrained from going in to try to stop the shooter.
It is unimaginable that while children are being murdered, adults would stay outside and especially cops. I have zero real training, shooting for fun and practice not counting as real training, but even if my own kids weren't in that building I would hope I would try to do something.
It makes one wonder why we spend all of this money on police, giving them military equipment and delegating the authority to use lethal force when they stand around outside because they are apparently afraid to go in. Thanks to BCE for the link: 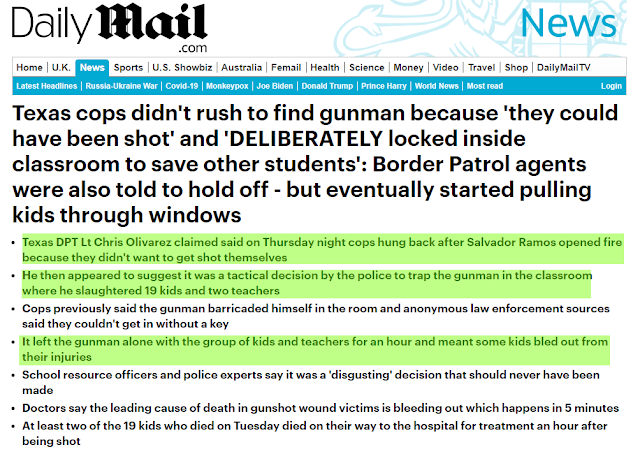 According to Texas Department of Safety Lt. Chris Olivarez....
Police initially said that the gunman barricaded himself inside the classroom and that they had trouble gaining access to the room, and one unnamed law official anonymously spoke out to say SWAT teams had to wait for a different school staff member to bring them a key to the class.
'At that point, if they proceeded any further not knowing where the suspect was at, they could’ve been shot, they could've been killed, and at that point that gunman would have had an opportunity to kill other people inside that school.
'So they were able to contain that gunman inside that classroom so that he was not able to go to any other portions of the school to commit any other killings,' Lt. Olivarez said.
Again I understand being scared but that is your fucking job. I thought it was understood that you are given these guns and that training with the expectation of putting yourself in harms way for the sake of others. There is a reason that we (used to) honor cops, soldiers and firefighters. They put their lives in jeopardy on our behalf. 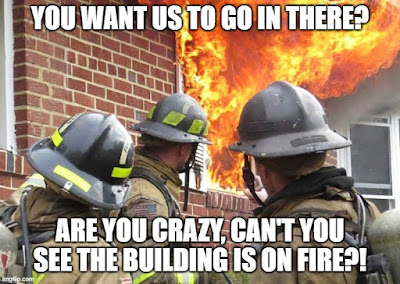 If nothing else, this should end the line of argument about civilians not needing guns because the cops are armed. More and more cops are not doing much with their guns and training. Some of it is understandable, who wants to intervene when blacks are rampaging and you could be the next Derek Chauvin for just doing your job. But in cases like this and Parkland, it seems that more cops are just running out the clock to get to their pension and have little interest in the sort of self-sacrifice we expect and assume from them.
What many of us have always known is that cops are not "first responders" in many cases. We are. If someone breaks into my home, sure we can call 911 but in the time that it takes for the sheriff to show up a lot of bad shit can happen and I for one am not interested in seeing how bad it gets before the cops show up. I am my own first responder. If my house is on fire, I will call 911 but make sure to do everything I can to get my wife and kids out even if it means losing my own life. I am not waiting for the fireman to show up to tell me what to do. 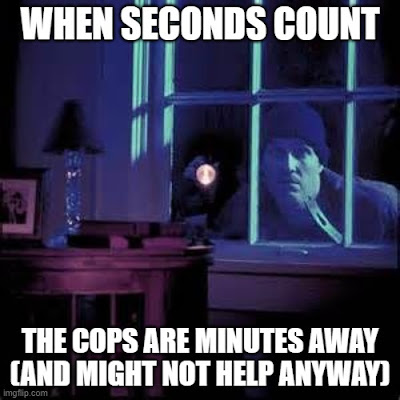 Something else to consider. Most normiecons are slavishly devoted to "Muh thin blue line" and backing up the cops no matter what. I think this might really damage that, along with crap like Waco, Ruby Ridge, the unlawful incarceration of the January 6th protesters, etc. Cops today, at least a growing percentage of them, are not the same sort of cops we think of from our youth. There are still good cops but the ratio seems to be shifting away from good cops and in favor of bad or at least mediocre cops.
Faith in law enforcement is one of the last hold-outs of institutional trust and it is high time it is abandoned. Everyone needs to understand that there are no institutions left that are not opposed to heritage Americans. NONE. The sooner people figure that out, the better. It just sucks that it took 19 little kids getting killed by a tranny for people to start to figure it out.
Posted by Arthur Sido at 3:33 PM