I posted this last year but it still seems relevant.
------
Just another long weekend, right Kneepads?
A lot of people living in America don't know the difference between Memorial Day and Veterans Day. They also don't care. It is another day where they don't have to work and get to drink some beer and grill out with family. I would cautiously say most of the men who died in the various wars would be happy that people spent the day with family and friends, even if they didn't know for sure why. We spent the day mostly working, gotta make hay while the sun is shining as the saying goes.
As Memorial Day winds down, I saw something interesting from the New York Post: 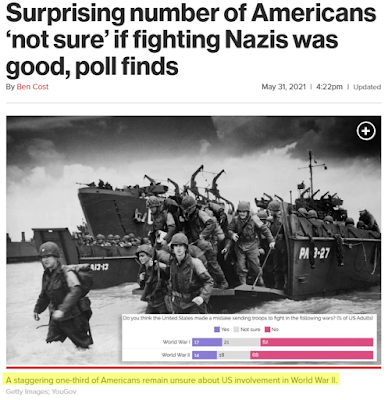 A lot of that is likely historical ignorance, I doubt you could find many Americans on the street that could locate WW II on a timeline within a decade, much less give more specific dates like Pearl Harbor and D-Day. On the other hand, what exactly did we "win" in WW II?
Almost 300,000 U.S. soldiers and sailors killed in action, mostly in Europe.
As soon as the war ended, the Soviets took over half of Europe and enslaved tens of millions of people for almost 50 years.
Five years after WW II ended, we were fighting communists in Korea and then a few years later in Vietnam. Another 80,000 killed in action and millions wounded physically and emotionally.
In the aftermath of the Allied "victory", Western Europe seems to have lost any will or desire to survive and they are slowing surrendering their freedom through mass migration, a refusal to have children and growing degeneracy.
The United States had a few decades as the leader of the free world but within two decades of the end of the war, our culture was collapsing and at a mere 75 years after WW II we are on the verge of complete collapse and ruin.
By the time we reach the 100th anniversary of the end of WW II in 2045, there likely won't be a West around to commemorate it.
Let me be clear that by no means is any of that to brush over the terrible things the Nazis did, or to deny the things that actually happened (as opposed to the cartoonish Hollywood villainy). My father's people in Poland and the rest of the Slavs were marked for replacement in favor of Germans as part of Generalplan Ost. There was plenty of tyranny under the Reich but there has always been and always will be bad people in the world.
On the other hand, Hitler rose to power in no small measure because the U.S. entered the First World War and tipped the balance, and that was definitely a war we had no business fighting in. In fact, you will be hard pressed to find a war since 1812 that was waged for a legitimate U.S. national interest with the notable exception of the Pacific theater of World War II. After all the Japs actually attacked us, after we goaded them into it of course so FDR could get his pretext to declare war. We couldn't really let that go.
I still maintain that if the boys in the landing craft on D-Day could have seen what would become of America and Europe in 2021, they would have forced the drivers of those craft to turn around. None of them would have wanted to die for what the West has become. 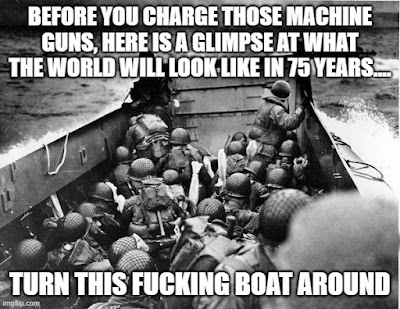 Maybe people are starting to wake up and realize that most of the wars we have fought have been about something other than what was best for the American people. We can honor the memory of those who nobly made the ultimate sacrifice while questioning the motivations of those who sent them to die.
Posted by Arthur Sido at 7:36 AM