Of Course They Won’t Stop With “Assault Weapons”

After the convenient and not-false-flag shootings in Buffalo and Uvalde, the clamor was immediate for the banning of “assault weapons”. “Assault weapons” are the low hanging fruit. Every idiot on most news channels and on social media has been blathering on about “weapons of war” non-stop for over a week. Not a one of them knows what they are talking about but they are aiming their message for the middling IQ people in the middle, mostly women if we are being honest, who are receptive to the message even if it lacks any facts. Like this tweet linking to a story at The Intercept. 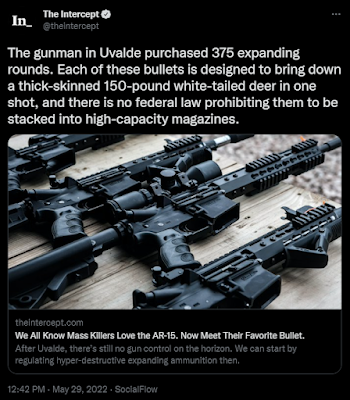 I assume that the Uvalde shooter was shooting a standard AR-15 chambered in 5.56mm and not something a little more exotic like an AR with a 6.5 Grendel, .350 Legend or 6.8 SPC upper that you actually can use in deer hunting. As far as I know you can’t use 5.56/.223 to hunt deer in most states  but you certainly can’t in my state of Indiana or in neighboring Ohio. In parts of neighboring Michigan I think you can. Also, who the hell classified white-tailed deer as “thick-skinned”? Have they ever seen a deer skin? This guy is a Cape Buffalo. He has a thick skin. A white-tail? Not so much. It also says bring down a deer in “one shot”. Well duh, a responsible sportsman wants to kill his quarry as quickly as possible. I don’t want the animal I shoot, whether a deer or bird or rabbit, to suffer unnecessarily. That isn’t a bad thing but on the other hand a full metal jacket 5.56mm isn’t something you want to be shot with either. Finally they say he bought 375 rounds as if that is a lot. I took this myself just a minute ago, this is 380 rounds of .223/5.56mm. Not exactly an enormous stockpile. 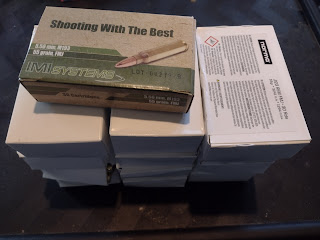 You get the point. I am sure you also understand that they won’t stop with “assault weapons”. Demented idiot Biden was captured just in the last day describing 9mm firearms as “high caliber” and there is “no rational basis” to own them. 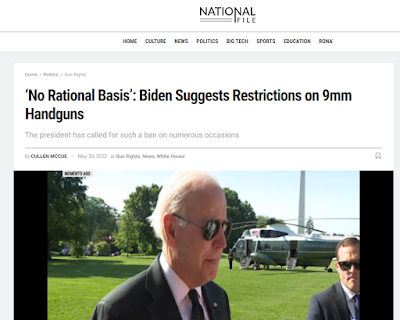 Even by his low standards this is pretty solid gibberish.

“There’s simply no rational basis for it in terms of self-protection.” pic.twitter.com/lPITAN5kEU

I am not sure what “high caliber” is, maybe he meant “large caliber”, but regardless no one really considers 9mm a “large caliber” round anyway. He apparently has been told some fanciful tales about the mighty 9mm….
Biden called for strict gun control outside the White House after returning from a trip to a New York trauma center where doctors showed him x-rays of gunshot victims.
“They said a .22-caliber bullet will lodge in the lung, and we can probably get it out — may be able to get it and save the life,” Biden said. “A 9mm bullet blows the lung out of the body.
“So the idea of these high-caliber weapons is, uh, there’s simply no rational basis for it in terms of thinking about self-protection, hunting,” the president went on.
Question, where can I get these 9mm rounds that “blow the lung out of the body”? Asking for a friend. (The friend is me). Biden doesn’t say anything that hasn’t been implanted by his handlers so clearly the goal here goes way beyond “assault weapons” and include the most common handgun caliber in America. I would guess that 9mm is used in mass shootings in far more cases than an AR-15 because it is so common and 9mm handguns are easy for Africans to conceal in their baggy pants so they can shoot a fellow African at the slightest insult. Apparently we are only going to be allowed to own .22 caliber firearms, until they get around to banning those as well.
Meanwhile in Canada, world class dipshit and national embarrassment Justin Trudeau is coming after all the guns.
WATCH: Justin Trudeau As He Announces Canada’s Proposed Legislation to Ban Handguns
According to a report by CBC, Canada’s leadership has introduced new gun control legislation, which includes a national freeze on buying, selling, importing, and transferring of handguns in Canada.

NOW – PM Trudeau: “It will no longer be possible to buy, sell, transfer, or import handguns anywhere in Canada.”pic.twitter.com/rVd5gWgEtq

You won’t be able to buy a handgun, sell a handgun or even give one to someone else from what I can tell. This is the most sweeping gun control yet for Canada and it is one step removed from confiscation. He is also promising to “buy back” the “assault weapons” previously banned in the country. Will Canadians meekly go along? I am afraid they likely will.
This is the same path American elites are pushing toward, albeit slightly slower. This is why we give them not a single inch. Not one. There is no compromise that is acceptable, no common ground with wannabe rulers.