Not Much To Add This Morning

Woke up wondering what sort of fiasco would greet me on rising but it seems pretty quiet in the wake of the not-at-all-obvious false flag in Buffalo yesterday. As of 7 AM the "President" hasn't said anything on Twitter. The last tweet was this doozy at 3 o'clock yesterday afternoon. 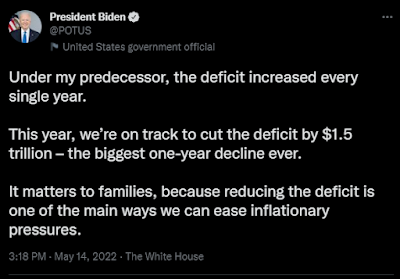 No mention of the deficit under his old boss Obama. Weird. Biden often disappears in the late afternoon even when a ready made crisis happens. It seems that the ADHD drugs they use to keep him sort of lucid wear off and he crashes by dinnertime.
Anyway I expect he will get on the tube once they get him his injections to make some rambling, incoherent and often punctuated by shouting speech about guns. Probably not until mid-morning at the earliest, after lunch more likely but I would expect to see the pistol brace rule come out earlier than expected at a minimum but some sort of executive order on "assault weapons" is likely as well. Also expect to see The Ministry Of Truth announce some crackdowns on speech in the name of "public health" and "fighting disinformation" since this guy allegedly was "radicalized" aka "started to pay attention" on 4Chan and /pol/. There will be the usual "news" hit pieces about "hate crimes", CNN ran this one already:
The Buffalo supermarket massacre is the latest high-profile mass shooting authorities say was motivated by hate. Here are others
This is "the latest", as if they happen all the time. Here is the list:
The shooting at a San Diego synagogue in 2019 by John Earnest
The Wal-Mart shooting of mestizos in El Paso in 2019 by Patrick Crusius
The Pittsburgh Tree Of Life synagogue in 2018 by Robert Bowers
Of course Dylan Roof and the Charleston shooting in 2015 because he is always mentioned
And the shooting of Sikhs in 2012 in Oak Creek, Wisconsin by Wade Michael Page
Notice that we have all of five "hate motivated" mass shootings over the last decade. Geez it is happening like once ever other year, what a crisis!
On the other hand we have had 19 mass shootings just this week prior to the Buffalo shootings.
And of course no mention of things like..
Emanuel Samson, a black man who declared he wanted to kill at least 10 White churchgoers at the Burnette Chapel Church of Christ in 2017, shot and killed one woman and wounded six others. He seems to be motivated by hate, right?
Or Frank James who shot up a subway in New York City and appeared to be targeting White people. That was just last month but he didn't make the list.
What about Darrell E. Brooks Jr. who drove his car through a crowd of White people in Waukesha, Wisconsin just last year.
Hate against Whites by blacks doesn't warrant mention from CNN, nor of course the acts of black-on-White interracial violence that occur every sixty seconds in America.
Pointing that out is of course also hateful, we are supposed to be killed and assaulted but just take it because of equity or some other bullshit.
Big Country Expat has a good rundown as well you should check out: Will He Have Three Names? UPDATED X5
Head on swivels boys.
Posted by Arthur Sido at 7:50 AM