One of the things I hate most about modern society, and there are lots of things, is how cheap everything is. I don't mean inexpensive obviously as everything costs more but even as prices go up, quality is going down. I mentioned this previously about the lawn mower debacle and it is true about so many things.
Clearly I spend a lot of time at my computer so it is something I invest in. When we first moved to Indiana over ten years ago, I treated myself to a new computer for gaming after mostly using boomer-tier Dell desktops. I decided to get an Alienware gaming rig which at the time was a little over a grand, a princely sum compared to the $500 desktops I was using. Long story short, it was a piece of shit. I had to call tech support to even get it started right out of the box, pulling it apart and reseating the mother board among other nonsense and I ended up spending a lot of time subsequently dealing with tech support. After that I just bought a few cheap computers that would puke after a couple of years, I would pass them on to the kids and get a new junk Dell.
Until about five years ago on Prime Day in July of 2017 when I splurged and bought a Cyberpower PC desktop. I dropped about $1500 on the thing which made me cringe at the time but I was sick of having to keep moving stuff from one computer to another after they fell apart. It had a 2 terrabyte secondary hard drive, 16 gb of RAM, Intel i7, NVidia 8 gb video card. It was sweet.
Fast forward five years. The thing still ran like a champ, always booted up, could run whatever I wanted, it didn't matter how many tabs I had open or other programs it ate it up. It was getting older but still working great and amortized out over five years it was only $300/year which is about what I was paying for garbage desktops. My youngest son (who is 16! holy crap) needed a new computer so me being me my proposal was that rather than him spending his own money I would give him current computer and get a new one for me from Cyberpower PC. Win all around.
Instead of buying a pre-built machine, I custom ordered this one. 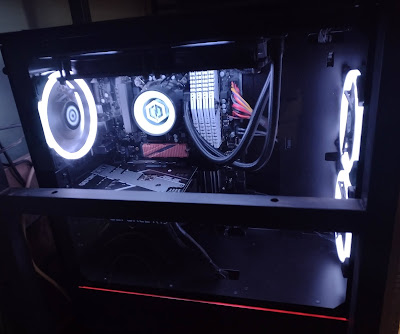 Significantly souped up. 32 gigs of RAM. 3 terabytes of memory on two hard drives. 12 gb GeForce video card. Liquid cooled. It even comes with a little remote control so I can change the colors on the case, and that was super important.
As much time as I spend on my computer, I like having a nice one and I don't mind spending the money if the quality matches the price. I do mind spending a bunch of money and still getting junk. I fully expect to get many years of service from this bad boy. No one is compensating me to say that thus far Cyberpower PC makes rigs that are worth the money.
Now I can spread my right-wing extremism online with even more speed and style!
Arthur Sido at 10:21 AM
Share