Minority Report Is Getting Closer To Reality 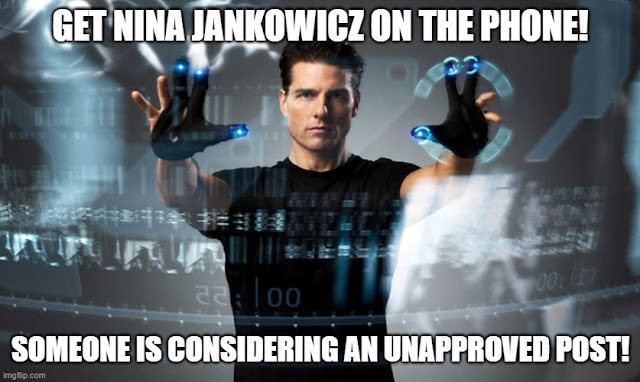 Along with the new Ministry Of Truth there is another dystopian trope coming true: the Department of Pre-Crime. Taken from Philip K. Dick's short novel, Minority Report, later made into a major film with Tom Cruise, the basic gist of the story is that in the future law enforcement will be able to predict crimes before they happen and arrest people for "pre-crime".
How is this coming true right now in 2022?
Having utterly failed so far to advance gun control under the Biden regime, even though it was a major campaign promise, the neo-Bolsheviks are seeking new ways to get guns out of the hands of those they want to load onto boxcars. So called "red flag" laws are one way but now we have a new method: "behavioral threat assessment".
From NPR....
How behavioral threat assessment can stop mass shootings before they occur
The basis of the story is a new book from Mark Follman who is an editor at the far left Mother Jones. Follman is also one of the masterminds behind of the most oft cited "proof" that White men commit most mass shootings. I covered this in 2020 here, How Do We Reduce Black Crime Statistics? Stop Counting Black Crimes!, but basically Follman and others put together a "study" of mass shootings that claims that 54% of mass shootings are committed by White men. How did they come to that conclusion? Easy, you just cook the numbers to get what you want. From my post, emphasis in red mine:
First thing, they use the "four or more killed" criteria which as I mentioned tends to under-report black shooters, although they modified this for shootings after 2013 to include three or more killed. Then they exclude gang shootings. Well hell, that is sure to give you the result you are looking for! Just take out conventional criminal shootings to focus only on specific types of mass shootings that oh by the way also happens to wildly over-represent white shooters. Since a lot of black mass shooters have a prior criminal record and/or gang affiliations, you simply don't count those and the percentages go way down but even doing that you still find that blacks are over-represented and whites are under-represented based on their per capita population.
There is an old saying, statistics never lie but liars use statistics.
That is pretty handy, just eliminate the hundreds of mass shootings per year that are "gang related" and also happen to be almost entirely committed by blacks and suddenly the story changes to reflect what you want. Like I said in my post, this is why you need to do your own research as most "proof" leftists provide on social media is bullshit that falls apart once you look a little closer.
Back to the NPR piece. Follman claims in the interview that mass shootings are all carefully planned out:
"This is planned violence," he says. "There is, in every one of these cases, always a trail of behavioral warning signs."
---
In actuality, Follman says, there's "a very rational thought process" that goes into planning and carrying out mass shootings.
This is in keeping with his disproven thesis that White men are carrying out most mass shootings, notice he says "in every one of these cases, always a trail of behavioral warning signs.". As my readers know, almost without exception mass shootings in America are the result of either a gang retaliation shooting or some sort of fight that escalates into gunfire. In other words, almost every single mass shooting for as long as we kept track of them is precisely the opposite of what Follman claims. It is not rational and not planned out.
Good research Mark, other than every fact you are basing your book on being incorrect, you are right on the money! So what does he propose? I'll screenshot this instead of copy and pasting it so as to not run into problems.... 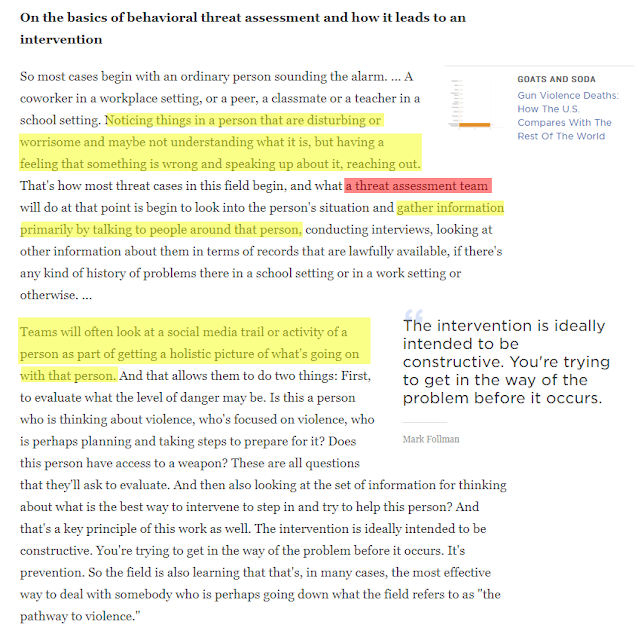 Notice how much of this happens without the person being investigated even being aware of it. Then we have the ominous sounding "threat assessment team" putting together a plan to "intervene". I am sure that people selected for these teams won't be weirdos and far left freaks. Then we have this beauty:
On how we measure a mass shooting that was prevented.
It's tricky to show results, to show its effectiveness. There's a really good analogy that one threat assessment expert uses. [There's] a forensic psychologist Reid Meloy, who's a research expert in the field, as well as a practitioner, and he likes to compare it to cardiology, the practice of preventing heart disease. Doctors can't tell you how many heart attacks they prevented with the care and treatment they provide their patients. But they can do a lot to lower the risk. That's the goal of this work as well, to steer people to a healthier place, onto a better path, to move away from violent thinking.
So they don't even have to pretend that this is working, just that they are harassing people for their social media posts on the basis of some asshole co-worker or pissed off family member.
In short this is another step to harass people on the basis of their political opinion. They haven't done anything wrong but a presumably publicly funded secret police will be investigating them anyway. Rather than investigating actual mass shootings, which inconveniently feature almost exclusively black shooters, we are instead supposed to concentrate on "intervention" with people that haven't done anything and almost certainly never will do anything.
Welcome to the latest chapter of our dystopian future where you are investigated for potential crimes that you likely won't ever commit.
Posted by Arthur Sido at 3:37 PM