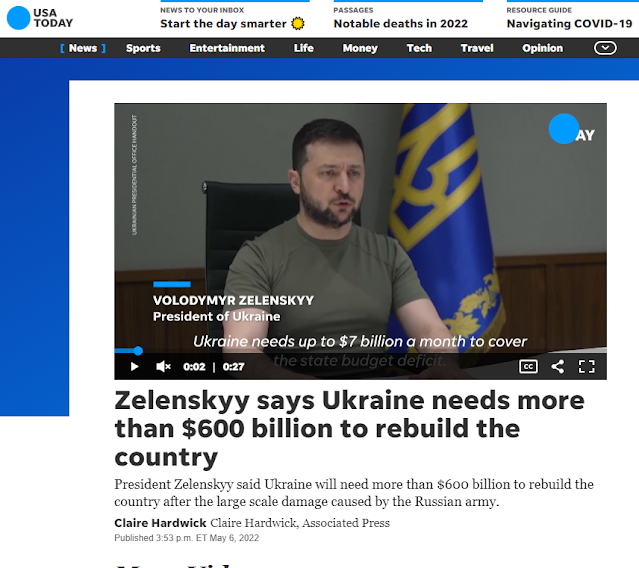 Link to story.
Depending on what source you use, the annual GDP of Ukraine is somewhere between 100 and 200 billion...from Wikipedia.

Let's give them the benefit of the doubt and say $200 billion in GDP. Zelenskyy is basically demanding the equivalent of three years of total economic output to "rebuild" the country. Ukraine has also long been considered one of the most corrupt nations in the world, keeping company with places like Mexico, Nepal and Zambia.
In other words, sending $600 billion to Ukraine would be a windfall for criminals and corrupt bureaucrats.
Have you wondered why the U.S. government seems so invested in this regional squabble? Sure, Vodka Man Bad, but more and more it is looking like it is at least as much about the hustle. A sensible nation concerned about the people of Ukraine would be helping to negotiate a peace treaty instead of prolonging a war that Ukraine cannot hope to win. Why? This is why....
The longer the war continues, the more money the West pours into Ukraine in "aid" and the more of that "aid" is converted to cash that hops on a plane and goes right back to the pockets of the same politicians demanding endless money for Ukraine.
Not to mention that the U.S. military is sending tons of munitions to Ukraine that of course now need to be replaced, like Javelin missiles. It is like rotating produce at a grocery store, send the old stuff to Ukraine and buy brand new.
This is a grift the likes of which we haven't seen in a long time, a war that is basically a giant money printing machine for the worst scoundrels in the world, many who live right here in the U.S. of A.. Sure there are lots of people dying but they are just White Slavs so who gives a shit?
The parasite class is doing all they can to leech the country dry of any bit of wealth they can grab before the whole thing collapses. It is all about positioning yourself to be in the right spot for the reordering of the Great Reset.
(For more see Leadership By Locust)
Posted by Arthur Sido at 8:07 AM