Life In The New America

Welcome to your new country.
Philly will institute weapons scans of middle schoolers starting Monday. Critics say, ‘This is not OK’
Subhead:
All sixth through eighth graders will be scanned at least once before the end of the school year.
Well isn't that just delightful.
When I was in sixth through eighth grade the only thing I was focused on was monitoring the development of my female classmates. If someone had mentioned putting up metal detectors in our school, they would have been sent to the funny farm. Then again, my school district back in the 1980s didn't look like the Philadelphia School District. Even today the website of the Anthony Wayne Local Schools has virtually no non-White kids pictured and the non-Whites that do appear seem to most be south Asians of some sort. Phillie? Not so much. 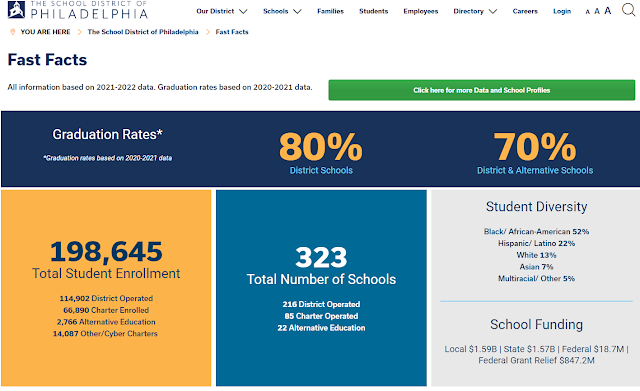 Only 13% White. This is a city that once was famous for being home to Irish and Italian immigrants and even further back it is where the Declaration of Independence and the Constitution were signed. Now her schools are only 13% White, while the city itself is supposedly 1/3 White.

If the city is 34% White but the schools are only 13% White that would seem to indicate a couple of things. One, the White people still in the city are older than child rearing age and two, that the White people that do live in Philadelphia send their kids to private schools. According to the same webpage, there are 169 languages spoken in the homes of these students. How do you service a school population that speaks 169 languages? Even if the kids speak passable English, and that is a big "If", then the parent(s) likely don't. Meanwhile, as noted in the original link, lots of black mamas ain't happy about dey chidlin' being wanded....
Shakeda Gaines, president of the Philadelphia Home and School Council, was aghast at the news.
“The School District of Philadelphia continues to criminalize our children and wonder why our babies do not want to go into these classrooms,” Gaines said. “This is not OK.”
Maybe if your "babies" weren't carrying guns and other weapons to school, there wouldn't need to be metal detectors at the schools? I watched a video just the other day of blacks kids at school and the one filming was going down a line and every black kid opened his jacket or lifted his shirt to show the gun he had at school.
Just for fun I looked up Shakeda Gaines at their website: 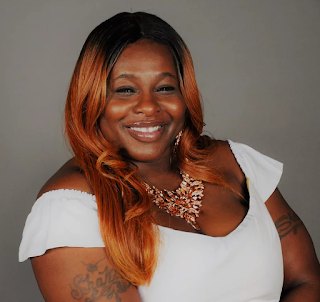 That is just a whole lotta blaque woman. The "treasury secretary" is another hot mama, one Aimee Brown. 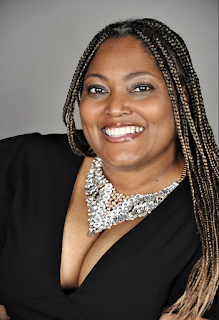 Ooof. I guess we know what part of her body she wants to emphasize.
Anyway, this is where our city schools are going with middle school children being checked for weapons. When one of these "babies" invariably shoots another "baby" at his inner city school, what will Shakeda say? Gib us mo' money and mo' gun control. In other words because they can't control dey "babies", law abiding White people in rural America should be disarmed.
Like most cities in America, Philadelphia is in the end stages of a massive hollowing out. In 1950 the city was at the peak of population with over 2 million residents. That has shrunk by around 400,000 people and the people in Philadelphia now are mostly non-White. That has led to a serious problem with vast swaths of cities like Detroit full of block after block of mostly vacant houses. Never fear, our globalist overlords have a solution!
St. Louis seeking to boost population with Afghan refugees
An aggressive effort in St. Louis is trying to lure Afghan refugees like Niazai. About 600 have arrived so far and another 750 are expected later this year.
Civic leaders are hopeful that over the next few years, thousands more will decide to relocate to the Midwestern city, helping to offset seven decades of population loss and rejuvenate urban neighborhoods — just as the arrival of Bosnian refugees did three decades ago.
Backfilling a city that emptied out thanks to black crime with people who are among the dumbest and most backward in the world. Sounds like a great plan! The population of St. Louis has plummeted, according to the article from 850,000 in 1950 (see a pattern here?) to under 300,000 current. Why did these cities start to bleed population around 1950? There is a clue in American history called "The Great Migration". Like the Great Reset, there hasn't been much great about it. Most Africans living in America after the Civil War were in the South obviously. From 1917 to 1970 there were two waves of massive relocation of blacks from the South to the large cities of the North. From Wikipedia:
Big cities were the principal destinations of southerners throughout the two phases of the Great Migration. In the first phase, eight major cities attracted two-thirds of the migrants: New York and Chicago, followed in order by Philadelphia, St. Louis, Denver, Detroit, Kansas City, Pittsburgh, and Indianapolis. The Second great Black migration increased the populations of these cities while adding others as destinations, including the Western states. Western cities such as Los Angeles, San Francisco, Oakland, Phoenix, Seattle, and Portland also managed to attract African Americans in large numbers.
Chicago, Philadelphia, Detroit, St. Louis. All of these cities now have something in common, widespread black violent crime. In 1950 Detroit was still 83% White and 16% black but even that low percentage was a huge increase compared to 1940 when the city was only 9% black. Today Detroit is less than 10% White and 78% black, with another 9% mixed race and 8% mestizo.
Drive around northern cities like Detroit and you will see what you can tell used to be nice neighborhoods of ethnic White people. As the Great Migration really took hold, Whites moved out of Detroit itself and into suburbs like Hamtramck which became known as a Polish enclave. Then the Muslims began moving in and the Poles began moving out. Today according to Wikipedia Hamtramck has almost twice the population of Bangladeshi (19.7%) as Polish (down to only 10.9%). Even Pakistanis out number Poles. Today the Muslim call to prayer is trumpeted in Hamtramck, starting as early as 6 AM.The Mayor is named Amer Ghalin and the city council appears to be entirely Muslim. 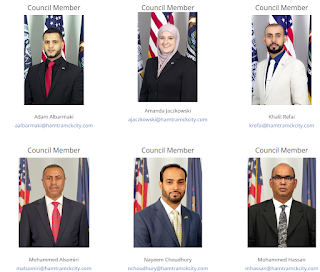 The only woman is named Amanda Jaczkowski which sounds like an ethnic Polish name and she is White but she has submitted to having her head wrapped up to comply with her husband's primitive religion. I am sure her Polish ancestors are proud.
Returning to the main article. The movement to fill St. Louis up with Afghan "refugees" is being spearheaded by one Jerry Schlichter, a local attorney. I saved you the trouble of checking his background, yes he is. His initiative, the St. Louis’ Afghan Resettlement Initiative, has a million dollars in donations and is notably backed by the Roman Catholic Archdiocese of St. Louis, using the tithed funds of Christian parishioners to fill cities up with Muslims. Jerry says that packing the city with Afghans is a "one-time opportunity" that should be taken advantage of. No real word on how filling up St. Louis with Stone Age primitives from one of the most backward countries in the world is going to revitalize St. Louis. Detroit is apparently trying the same thing.
Perhaps most aggravating were a couple of lines near the end.
A major hurdle for Afghan refugees is housing. Across the country, thousands still live in hotels.
Thousands. Living in hotels. These people don't have any money so who is paying for these hotel rooms a year later? In all likelihood, you are. Then this....
(Inamullah) Niazai, his wife and their two young daughters fled Kabul last year....
The initiative helped find them a place to rent — a brick home on a quiet street a few miles south of the Gateway Arch that now is home to 11 family members. Volunteers provided furniture, food and what Niazai called “welcome money.” Someone even gave him a car.
Niazai said he feels at home in St. Louis.
“We will stay,” he said. “My future is good here.”
Well sure your future looks good. You escaped from an entire country full of people like you and came to a place where people like me give you tons of free shit, from housing, food and even a car. This Niazai guy is 23 and looks fairly non-threatening, wearing a suit given to him. 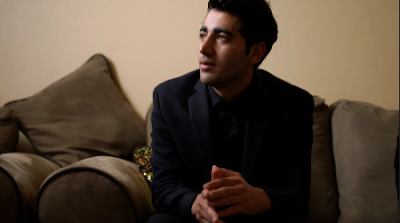 Not some older bearded goatherder who has brought his 11 year old "bride" with him. Very cleverly done.
This is the America our children and grandchildren will not inherit so much as have inflicted upon them: the once great cities built by White men first abandoned by those same men as black crime ran rampant and then back-filled by "refugees" from some of the most primitive societies on earth. Middle and elementary schools full of black and brown kids so prone to violence that they need to be subjected to metal detectors to keep them from bringing guns and knives to school. A post-Babel cacophony of languages spoken by people who had no hand in building our cities and yet they demand that the descendants of those builders provide for their every need and desire. A shrinking White minority struggling to keep the lights on and a lid on the violence, a struggle that will ultimately be in vain.
That is the near future for our people. But it won't be the end, not if I have anything to say about it.
Posted by Arthur Sido at 7:00 AM