He Coulda Been A Zillionaire!

No this is not a headline from The Babylon Bee or The Onion. It is a real editorial in the Guardian. 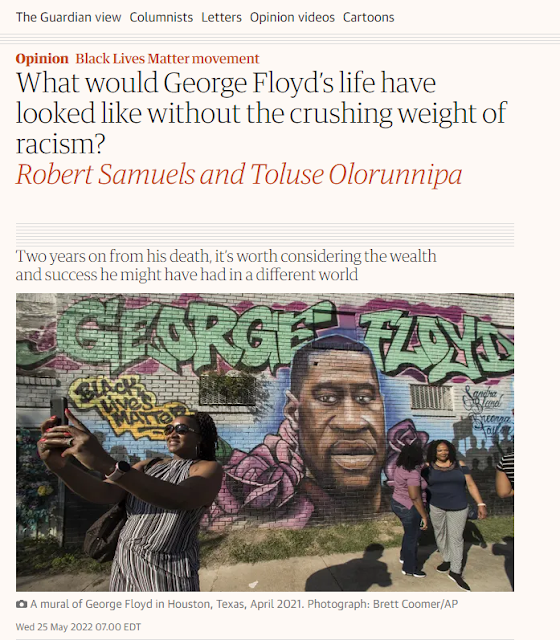 That is quite the question. You have to get pretty far into this nonsense to see the musing of Robert Samuels and Toluse Olorunnipa, both black men, Olorunnipa having moved here from Nigeria and then attended Stanford who now spends his time telling White people how awful the country he moved to really is, to get to their fantasy about the Floyd-that-could-have-been....
Instead of being born impoverished, Floyd could have come into the world as a wealthy scion of an industrious great-great-grandfather, if racism had not stripped his hardworking ancestors of their landholdings in North Carolina at the turn of the 20th century. He could have been able to pursue his second-grade dream of ascending to the supreme court, if underfunded public schools and dilapidated public housing had not defined his adolescence in a segregated slum. His lyricism and poetic nature could have elevated him to prominence in the world of arts, if his struggles with addiction and mental illness had been met with treatment rather than the unforgiving cruelty of the US’s mass incarceration complex. His less ambitious goals later in life – to become a truck driver or to open a small restaurant and provide jobs for the downtrodden – could have been achievable if Derek Chauvin had not ignored his pleas for mercy on that fateful day two years ago.
Oh my.  We are supposed to believe that Floyd, a man who almost certainly had a sub-80 IQ, would have become a great industrialist or a famous composer (he liked to rap apparently) if it were not for "racism". He had unlimited human potential that was stripped from him by White people. This is in keeping with the incredible retconning of George Floyd from a piece of shit career violent criminal to a messianic figure who deserved a gold coffin, statues and multiple funerals complete with professional mourners weeping uncontrollably and rending their garments. It is an amazing rehabilitation of the character of someone that most of the weeping White women who bought bLM schlock would have crossed the street to avoid. From common criminal to modern folk hero/messianic martyr.
Is it true? Of course not. Is there even a shred of truth to it? No.
To the contrary, there is nothing about George Floyd that would indicate that he would have ever been anything other than a thug and animal. Did he have a hard luck story? I guess so but then again lots of people do. Being middle class is a fairly new phenomena in the history of the world.
Lots of people grew up poor and came from poor backgrounds. Most of them don't turn out to be violent criminals. I have recounted my own family background in this post: Repost: What My White Privilege Looked Like and I suspect many of my readers could tell a similar story. My wife's family also came from humble, working class beginnings with sharecroppers and people who got dirty for a living all throughout the story. No one gave us anything, what we have we earned by the labor of our own two hands. Nothing prevented George Floyd from doing the same except George Floyd himself.
What about his mental illness and drug addiction?
Lots of people struggle with mental illness. Something like 40 million people in this country are on antidepressant pills. Most people suffer bouts of mental illness at some point in their lives but we don't go around shoving guns into the abdomen of pregnant women while robbing them. As for the drugs, no one makes you take drugs, legal or illegal.
Of course the beauty of an essay like this is that it is impossible to prove or disprove. Floyd is dead so we are dealing with hypotheticals about his life and what it could have been. He never had the chance to "turn his life around" which everyone says black criminals are on the cusp of doing but never seems to actually happen. Floyd was 46 when he died and while it is possible to make major life changes at 46, it is pretty unlikely. This essay is a form of racialist romantic pornography, a fanciful tale of a man who showed no indications of ever being anything but garbage who would come to a bad end one way or the other. The purpose of the essay is to sell the book these two guys are shilling: His Name is George Floyd: One Man’s Life and the Struggle for Racial Justice. I am sure most of the sales of what is certainly a trash "biography" were sold to guilty White liberals, the fertile field harvested for easy gibs by clever blacks.
Sensible people understand. No amount of "justice" in George Floyd's past would make his IQ higher or change his lack of impulse control. He is just one of the most famous examples of the great problem without a solution: what to do with the African population living in America that clearly will never be able to integrate into our society? That is the topic for posts to come.
Posted by Arthur Sido at 11:23 AM