From the Washington Post this morning: How Putin’s brutal war in Ukraine pushed Finland toward NATO 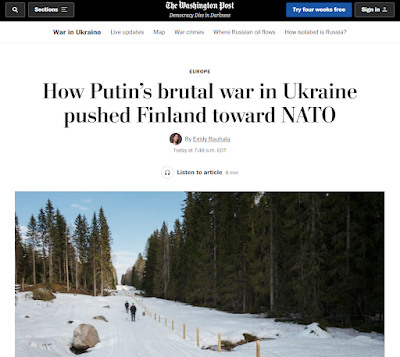 "Someone" is pushing Finland toward NATO and a possible expanded conflict with Russia.
According to the article, Finland is super ready to fight Russia if needed. Finland maintains a "wartime force" of some 280,000 troops which is eerily similar to what Ukraine is reported to have had at the beginning of the invasion. The bigger difference is that while Ukraine has a population of just over 40 million people in a country of 232,000 square miles, Finland only has a population of around 5.5 million. That is fewer people than 9 American metropolitan areas.
The WaPo post breathlessly describes the Finnish military might but that is just fluff. I am not doubting the courage of the Finns, they fought the brutal Winter War against Russia prior to WW II but just as we are no longer the same people that fought in World War II, neither are the Finns. The current Prime Minister of Finland is Sanna Marin, who at 34 when first elected was the world's youngest national leader. She is 37 now and proudly boasts of being both the child of a "rainbow family", raised by a pair of dykes, and also is a vegetarian. She is most famous for a profile in a Finnish magazine called Trendi where she is photographed wearing a blazer with nothing underneath. 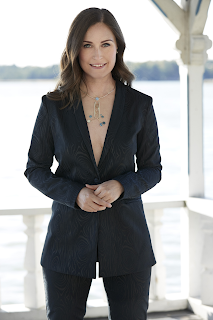 She might have been mildly attractive in her 20s and certainly is better looking than the horror show new Commissar of the Ministry of Truth, Nina Jankowicz. But a war-time leader? Maybe she can seduce Putin into not invading her country, as the Finns are trying their best to be invaded by Africans and Middle Easterners already.
Finland shares a very long border with Russia, around 830 miles long although much of it is pretty barren wilderness. 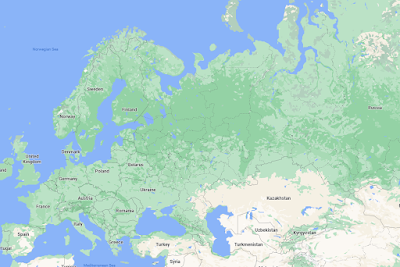 If you look at it on the satellite view, there aren't many roads crossing the border and most of it is completely uninhabited. But Helsinki itself sits right on the ocean in the Gulf Of Finland and is only spitting distance from St. Petersburg via what appears to be a pretty decent highway.
What the Finns don't seem to understand is the same thing Ukraine failed to realize: NATO isn't trying to "protect" them, the powers running the West don't give a shit about them, but they are maneuvering to try to hurt Russia. That is slipped into the WaPo article:
NATO, the United States and the E.U. are now planning for the long-term isolation of Russia, marking the return of Cold War-style containment after years of coexistence and cooperation.
“This is one of those moments in European history,” said Alexander Stubb, former prime minister of Finland. “What we are looking at is the semi-permanent division of Europe into two.”
On one side, he said, you have an aggressive, authoritarian Russia and its cobelligerent, Belarus. On the other side, you have more than 30 democracies more or less united by a common foe.
After we finally ended the Cold War a few decades ago, it appears we are headed right back there again thanks to the globalists. Remember that the Washington Post is the Pravda of our court mandarin class in D.C. so what they say is what they are told to say by the Powers That Be. "They" want to encourage Finland to join NATO to provoke Putin. As others have said, the neo-Bolsheviks are willing to fight Russia to the last Ukrainian (and Finn) to hurt Putin and keep Russia isolated. The Finns are being set up as the next meatshield to absorb bullets and bombs from the Russian military.
The Finns are not in any danger from Russia as a neutral neighbor but the West is successfully frightening their bimbo Prime Minister into thinking otherwise and joining NATO, which then actually puts Finland in the Russian crosshairs. Finns will die in large numbers if Finland joins NATO and Russia lashes out, Finns who would be in zero danger from Russia if they don't join NATO.
What is the point of joining a military alliance to protect you from a threat that doesn't exist unless you join that alliance?
The Finns and Swedes don't seem to understand this and while I am not defending Russia's actions in Ukraine or potentially against Finland (nor condemning them), it is simply a fact that provoking a military superpower by joining an alliance that is a shell of what it was 70 years ago is suicidal when all it accomplishes is putting you under a threat to didn't exist before.
Don't underestimate how willing our rulers are to do whatever it takes to maintain their power and with an electoral bloodbath predicted for the Left in November, anything and everything to avoid that is on the table, even an open conflict with nuclear armed Russia.
Posted by Arthur Sido at 8:28 AM