Don't Bring That Crap Up Here

On Sunday four people decided to break into a home in Dekalb County, Indiana which happens to be my county. All four left, two in cuffs and two in body bags.
Homeowner kills 2 intruders, holds 2 more at gunpoint for police
Imma going to guess they were trying to rob the guy for money to buy drugs.... 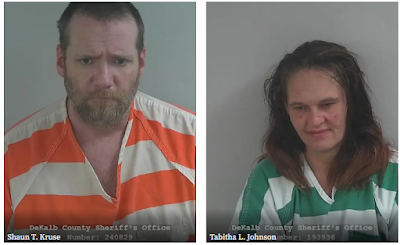 Just a sneaking hunch, made more likely by the fact most of them had prior drug convictions. They apparently pulled a gun but it turns out the resident had one as well. The two survivors, the charmers in the picture above, not only face burglary charges but also felony murder charges. I guess they get blamed for the other two idiots getting killed by the homeowner.
Three of the four came from Allen County to our south, home to Fort Wayne. You might get away with breaking into homes in the Fort but out here in the country, you break into our place and you are likely leaving at room temperature. The place they hit is on a pretty busy state highway with lots of traffic, not sure why they thought it was a good place to rob but apparently they chose poorly.
Keep that shit down in the Fort methheads. We don't play 'round in Dekalb County.
Arthur Sido at 11:54 AM
Share