It seems a bit macabre in light of the shooting in Texas but Memorial Day weekend is coming up and that means gun deals galore.
One that I already saw is from Norma Ammunition. 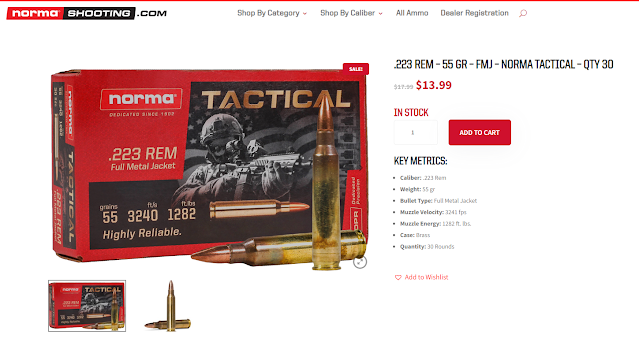 Notice that they sell in boxes of 30, not 20, so this is around $.46/round which isn't great but they are running a concurrent deal for free shipping on any order and that makes this an OK deal if you aren't looking to buy 1000 rounds.
Palmetto State of course has some stupid good deals, like a bolt carrier group shipped for $69.99. That is a price that should make you think about getting one (or two) and tossing them in the safe ** just in case **.

Also lots of complete uppers and lowers on sale so you can make an extra AR for under $500 and in light of what just happened, that wouldn't be a bad idea.
I'll update this post as the week goes on, leave a comment or send me a note if you see any good deals as well.
I fully expect at a minimum some executive action following this mass shooting today, this might be the last chance to get deals like this for a while.
Posted by Arthur Sido at 7:35 PM