A news story ran on my social media feed that at first blush looked like it might gain some traction, a mass shooting in a tiny town in Oklahoma. In the wake of Uvalde and Buffalo, a mass shooting at an outdoor festival in rural Oklahoma sounded like something the media would be all over.
But then I started to do that thing I do that gets me called racist. I started to notice some things.
First, one person was killed and seven were wounded. Huh, that crappy kill/wound ratio seems oddly familiar.
Then I did a little more noticing and saw that some guy named Skylar Buckner had been arrested. Now Skylar sounds like a White guy but then I saw a news story with a mugshot. 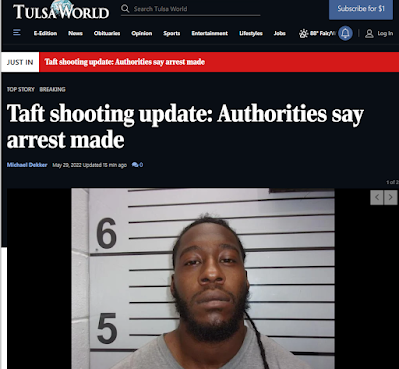 Same story had his full name: Skylar Dewayne Buckner. Oh things are looking clearer.
It still seemed weird to have this happen in a little town called Taft, Oklahoma with a population of around 250. But then I noticed some more things in a related news story.
Taft, founded around 1902, is one of only 13 predominantly Black towns still existing in Oklahoma. The state once was home to more than 50, more than any other state.
Now the dots are connecting. According to Wikipedia the town is a garden spot.

Cops recovered at least 40 spent casings from four different calibers so at a minimum four people were blazing away and only 8 people were hit. Nice shooting boys.
Just another of the hundreds of mass shootings that no one pays any attention to because blacks shooting other blacks just isn't that interesting, even when the shooting happens in a little town like Taft, Oklahoma.
Even in a small rural town in a red state like Oklahoma, get enough Africans together in one place and the guns will come out.
(Side note, already 26 people shot this weekend in Chicago and with really nice weather and the sun going down, you can be sure that number is going up)
Posted by Arthur Sido at 7:36 PM