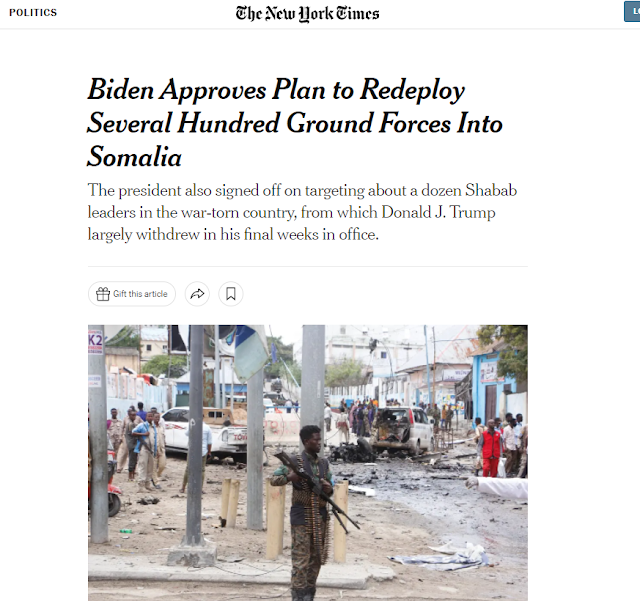 Biden Approves Plan to Redeploy Several Hundred Ground Forces Into Somalia
From the Slimes...
WASHINGTON — President Biden has signed an order authorizing the military to once again deploy hundreds of Special Operations forces inside Somalia — largely reversing the decision by President Donald J. Trump to withdraw nearly all 700 ground troops who had been stationed there, according to four officials familiar with the matter.
In addition, Mr. Biden has approved a Pentagon request for standing authority to target about a dozen suspected leaders of Al Shabab, the Somali terrorist group that is affiliated with Al Qaeda, three of the officials said. Since Mr. Biden took office, airstrikes have largely been limited to those meant to defend partner forces facing an immediate threat.
Together, the decisions by Mr. Biden, described by the officials on the condition of anonymity, will revive an open-ended American counterterrorism operation that has amounted to a slow-burn war through three administrations. The move stands in contrast to his decision last year to pull American forces from Afghanistan, saying that “it is time to end the forever war.”
Ominous words: "...an open-ended American counterterrorism operation"
Looks like endless war is back on the menu boys. How soon before the body bags start coming back?