Baby Killers And Whores Get Rekt

If you thought the freak out after the 2016 election was bad, you ain't seen nothing yet. A draft of the much anticipated Supreme Court decision that rightly overturns Roe v Wade has been "leaked": 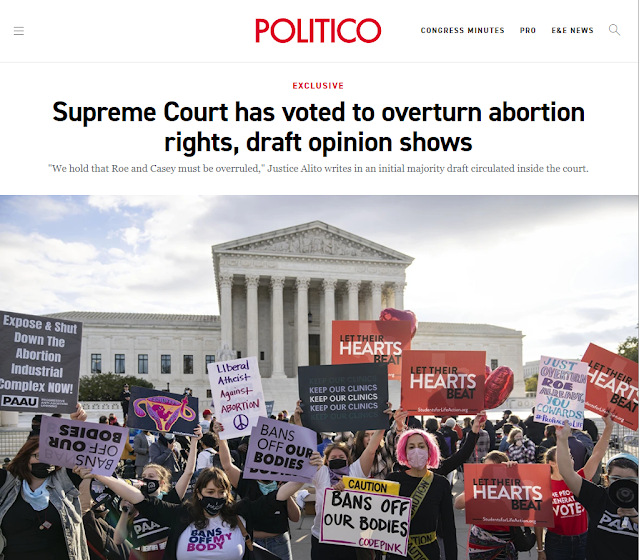 The leak is very suspicious:
No draft decision in the modern history of the court has been disclosed publicly while a case was still pending. The unprecedented revelation is bound to intensify the debate over what was already the most controversial case on the docket this term.
I assume this unprecedented "leak" was done intentionally to soften the blow when the actual ruling comes down because there are going to be some serious chimp outs from ugly feminists* who no one wants to impregnate anyway (*I know "ugly feminist" is redundant). Let them start to blow up now so maybe they will be spent when it comes down but it could backfire and just give them more time to get wound up.
Wherever you come down on abortion and my own position has evolved over the years, it is without question that Roe v Wade was an abomination. Justice Samuel Alito in the "leaked" draft put it well:

“Roe was egregiously wrong from the start. Its reasoning was exceptionally weak, and the decision has had damaging consequences. And far from bringing about a national settlement of the abortion issue, Roe and Casey have enflamed debate and deepened division.”

Quite true, as anyone who has actually read the decision already knows.
The "right" to murder an unborn child is an unholy sacrament for the Left, the ultimate blood sacrifice to seal their governing philosophy that demands no accountability for individual decisions and actions. For the Left this is an assault on something they consider sacred and it won't be accepted meekly as "conservatives" respond to every setback.
Of course overturning Roe doesn't ban abortion, it simply returns to the states the decision on whether to allow abortion or not. This is in keeping with the 10th Amendment as the Constitution makes no mention in any sense regarding abortion.
“The Constitution does not prohibit the citizens of each State from regulating or prohibiting abortion,” the draft concludes. “Roe and Casey arrogated that authority. We now overrule those decisions and return that authority to the people and their elected representatives.”
Some states will allow infanticide, others will restrict it and many will ban it outright. This will have the effect of further dividing the nation up by "Blue" and "Red" states, reinforcing that we are two different people dwelling uneasily under one legal construct. Perhaps this will push us to have the conversation we need to have before this turns to bloodshed.
Whatever comes next it will be ugly and likely violent but the tears and rage of would-be baby killers will be delicious.
Posted by Arthur Sido at 7:20 AM