Alexa: How Do Famines Start? 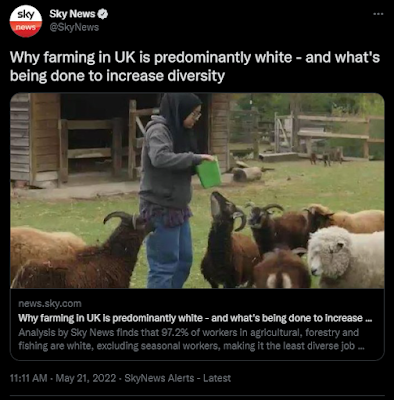 Why farming in UK is predominantly white - and what's being done to increase diversity
Analysis by Sky News finds that 97.2% of workers in agricultural, forestry and fishing are white, excluding seasonal workers, making it the least diverse job sector in the country.
Why in the world would most farmers in the UK be White? Could it be.....
RACISM!
Or maybe there is another reason.... 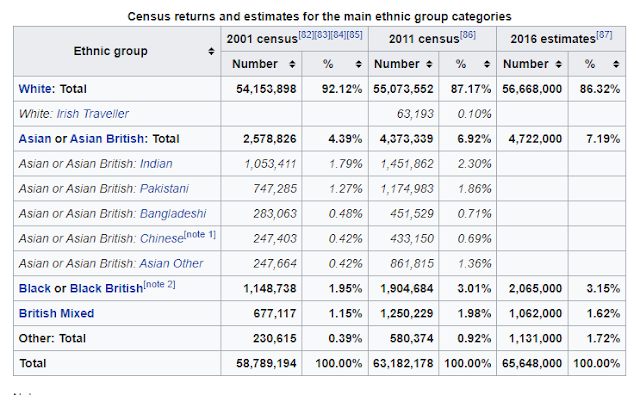 Even in 2016, the UK was still over 86% White,. That makes sense as the British Isles have always been populated by White people, bullshit theories otherwise notwithstanding. Even as recently as 2001 it was over 92% White and if you go back a little farther I imagine that percentage was even higher.
Not to mention that farming isn't something you can just stumble into. If you want to become a skilled tradesperson, you get an apprenticeship or go to a trade school and in short order you can become a plumber or welder. To be a farmer requires both a significant amount of knowledge and a massive investment in both land and equipment, not to mention an inherent predisposiiton toward the skills you need to be a farmer. I know I can't farm full time, not least because as a White guy no one will give me a loan to buy a farm but also because I don't have the skills to do it. I know how to drive a tractor and I have on occasion but I am terrible at it. Likewise I am awful at fixing stuff. My wife who grew up on a farm? She could do it but not me.
It just makes sense that farming reflects the historic racial character of the UK as most farmers come from generations of farmers who built the farm before them. For example, the farmer next door who own most of the land around us is quite wealthy in terms of assets. He has a ton of acreage, over a thousand acres for sure, and uses his crops to feed out hogs. He didn't just stumble into this farm. No one gave him a 1000 acre farm at a secret meeting of White people. Instead his dad, who lives down the road from us and he lives in a very small, modest home, is responsible for much of what the farm is today. He is a veteran of the Korean War and he built up this farm over the course of the last 60+ years. Up until recently he still helped by driving equipment around. Our neighbor's farm is a legacy of the decades of very hard work. I assume this is even more true in the UK which is much smaller and much older. Some Paki or Afghani or Nigerian who stumbles into the UK doesn't get a farm just for showing up. Plus, it might just be they don't want to farm. From the linked story:
Mr (Muhsen) Hassanin supports the RAU's decision to increase diversity at the university level, but says there should not be quotas.
He said: "It's quite a closed industry because a lot of farming is family based. I don't think there should be a quota to put diversity into it.
"I can speak for my community…they don't want to do it. They're lawyers, doctors, they've gone up in society, why am I going to go back to be a peasant farmer?"
You don't learn to be a farmer in college but the last line is important. People don't move from rural, agrarian places to be a farmer in a new place. Immigrants and non-Whites in general tend to live in urban areas and just don't want to farm. According to Wikipedia over 1/3 of the population of London is foreign born and the city is barely majority White. So non-Whites live in the cities predominantly and rural areas where the farms are tend to be overwhelmingly White. For more on the topic of why there are so few black farmers see my post: Cory Booker's Plan To Turn America Into South Africa
This raises the question that I assume you know the answer to already: who cares if White people are the majority of farmers? Does the food taste better or is it more nutritious if the person who planted it was non-White?
Farming is hard work, it is terribly uncertain and it isn't for everyone. One of the great sign of "progress" in society is the move away from agrarian economies. With increased productivity, fewer farmers can feed larger numbers of people, freeing those people up to do something more important like powerpoint presentations and serving overpriced coffee to teenaged girls. So why the push?
The real reason is fairly simple: it enrages "Them" when White people do anything.
There is nothing and nowhere that White people can simply exist without being told they need to "make space" for non-Whites who haven't done anything to earn those spaces. It also doesn't matter what the repercussions are for getting the diversity you demand. You can show people the example of Rhodesia going from the breadbasket of Africa to Zimbabwe, the basketcase of Africa, and they don't care because "diversity", or "fewer White people", is itself the highest goal one can achieve.
Forced diversity is deadly, whether in medicine or engineering or farming. The people pushing diversity don't care because it has always been about White replacement via slow moving genocide and cultural displacement. Once you understand that, stories like why farming is overwhelmingly White in a historically overwhelmingly White, why it is a problem and how to "fix" it start to make more sense.
Posted by Arthur Sido at 9:49 AM