The Grift Of The Century

Big Country has an excellent post up about the 'Kraine, the most important topic of the day and one most of us are sick to death of talking about. The post, So Now What?, is one of those valuable essays that comes from the mind of someone with *actual* military experience. The gist is pretty simple but worth reading the whole thing: we are supposedly giving all of this high tech gear to Ukraine but who is teaching them to use unfamiliar weapons systems and where are they training them in the middle of a war? The example he uses is artillery. Now I can *probably* figure out how to load and fire an artillery piece if no one is shooting at me but aiming the damn thing? Not so much.
Give someone a wagonload of swords and they can figure them out pretty quickly, if not proficiently. State of the art artillery? Yeah....
What about all of that ammo American munitions manufacturers are supposedly sending to Ukraine, like Federal? 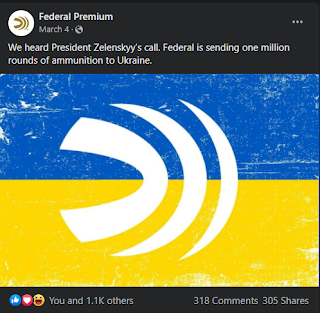 How is that getting distributed to the "troops" on the front line?
Don't know.
All of this military aid being sent to Ukraine, to the tune of billions of your tax dollars?
Watch live: Biden announces massive new aid package for Ukraine
President Joe Biden will announce a new military aid package to Ukraine, which is expected to look similar to the $800 million in assistance that the U.S. released a week ago.
We are just dumping hundreds of million in "aid" into this country and then expecting it will magically be used to smite the invading Cossacks.
Where is it going? How is it getting there? Who is making sure it gets distributed to the Ukrainian troops and not out the backdoor?
Don't know.
Ukraine was considered one of the most corrupt nations in Europe and that was before Vodka Man Bad sent in the troops. Do you really think that this high tech equipment is all being safely delivered to Ukrainian solders on the front line?
Spoiler alert, it almost certainly isn't all making it there and it wouldn't surprise me if virtually none of it was actually being used by the Ukrainian armedforces. For example:
'Black Hole' - White House Doesn't Know Where US Weapons Go After Entering Ukraine
A US official said the White House has “almost zero” ability to track the weapons it is sending to Ukraine. So far, President Joe Biden has approved over $3 billion in arms shipments to Kiev.
Speaking with CNN about the weapons, one source said, “we have fidelity for a short time, but when it enters the fog of war, we have almost zero. It drops into a big black hole, and you have almost no sense of it at all after a short period of time.”
The source said the US lacked personnel “on the ground,” making it nearly impossible to track the movement of weapons. Another source told CNN Ukraine was incentivized to lie to get access to more weapons, saying “It’s a war – every statement is an information operation, every interview. Every Zelensky appearance broadcast is an information operation.”
It would be perfectly reasonable to think that much of this weaponry is simply being unloaded from NATO trucks and onto trucks owned by criminals to be sold to the highest bidder.
It reminds me of the hustle during the Boston "Big Dig" project where the corruption was legendary and not a few people were arrested.
Big Dig foreman charged with stealing millions in steel
BOSTON (AP) — A Big Dig construction supervisor faces charges of stealing tons of steel from the massive downtown Boston highway project.
A site foreman on the Central Artery/Third Harbor Tunnel project, Mark S. Elliott, is accused of having steel purchased by a Big Dig contractor loaded onto trucks and taken to scrap yards, where it was sold, The Boston Globe reported today.
How it worked, the Big Dig would buy a bunch of brand new steel for the project, it would be delivered and then promptly loaded right back onto different trucks to be sold as scrap metal. It wasn't "scrap", it was brand new steel but the project was so enormous, originally budgeted at around $2.8 billion but actually coming in at over $8 billion, that the amount of graft and fraud was enormous and will never be known.
That was in Boston. Imagine what it is like in Ukraine with zero oversight and accountability. You think these Ukrainian crime lords care about losing a little territory in the east when they can make millions selling U.S. arms to criminals and terrorists?
This whole war has the stench of a money printing machine for the elites with lots of dead White people as an added bonus. The cheerleaders on both sides haven't a clue that this entire thing is a giant scam.
Posted by Arthur Sido at 2:35 PM