In spite of my admonition that You Don't Need Another Handgun I seem to keep picking them up.
Over Easter weekend Palmetto State was running a pretty good sale on their complete Dagger frames including the trigger and fire control group for only $99 and free shipping. All you needed was the slide and barrel. As it happened, they also had one of their nicer slides on sale, one of their RMR-ready with Ameriglo Lower 1/3 Co-Witness Sights for only $129.99. Good deal but I don't really need another handgun.
Then I remembered that I already have an extra Dagger barrel, a threaded barrel no less, thanks to the fiasco that took place in getting my original Dagger (See: What A Long Strange Trip It Has Been).
So basically for $230 I could get a second Dagger?
Sold. 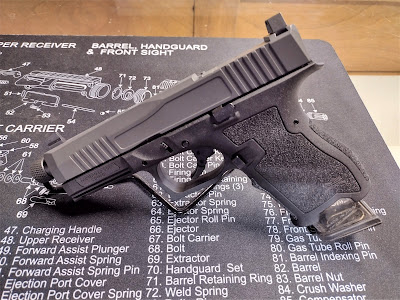 You might recall that I was also sent a free stripped lower while waiting for my original Dagger, which I sold for I think $90 back in the midst of the craziness. So subtracting that from the original purchase price and then adding in the cost of the new slide and frame and I figure I got two Daggers for a grand total of about $450 (plus sales tax). At an average of $225 apiece, that is a good deal. The only downside is that almost any decent RMR red dot I put on the new Dagger will cost more than the gun itself.
Do as I say, not as I do aside, that was hard to pass up. So I didn't.
Posted by Arthur Sido at 3:24 PM