Some Thoughts On The South

The view from our vacation getaway. Spent a lot of time reading and chillin'. 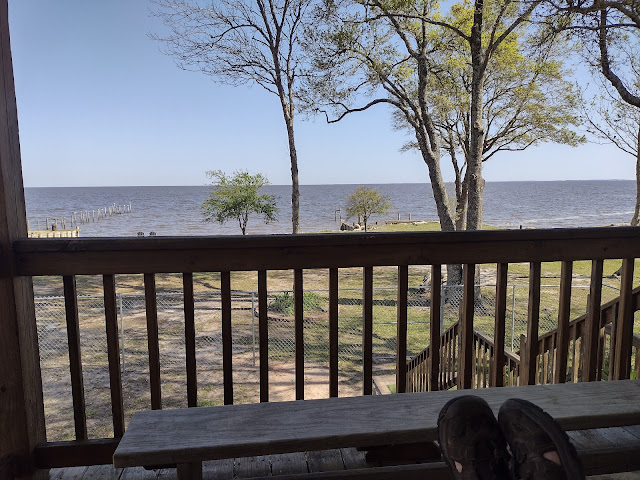 We were right on the Gulf Of Mexico in Mississippi in the town of Ocean Springs, you can't see it from the picture above but there are a couple of large barrier islands that seemed to keep the water fairly calm

A few other pics. 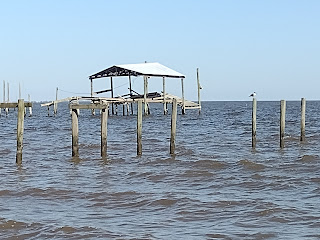 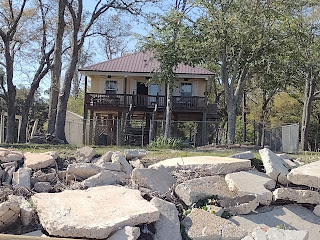 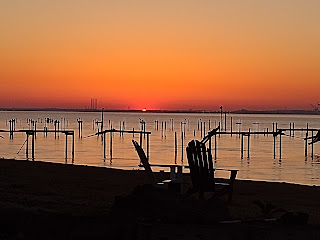 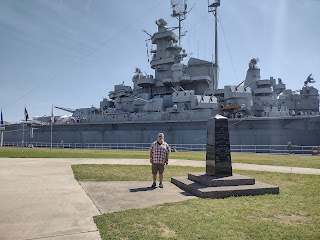 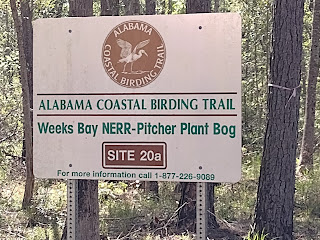 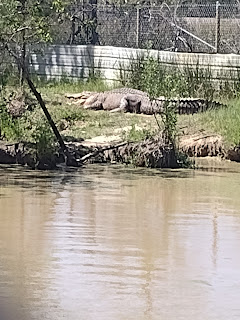 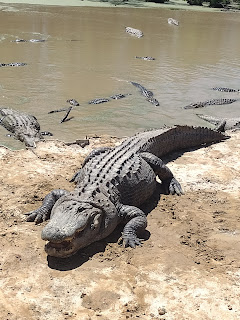 Other thoughts on the south.
- The presence of lingering diversity from the post antebellum South is everywhere.
- First we stopped by the Bass Pro Shop in Memphis, Tennessee, the famous pyramid store. 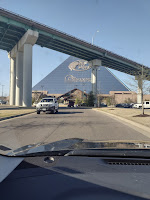 All over the place are signs warning against leaving any valuables in your car and there was at least one security vehicle patrolling the lot. On the other hand I have been to lots of Cabelas and Bass Pro Shops, from Nebraska to Ohio and Michigan and none of them had such overt security issues. We took some pictures and kept going, I didn't need my shit getting stolen on the first day of vacation.
On the way out of Memphis there was a billboard that read: "Memphis is dangerous, get your carry permit". I support everyone being armed but nowhere else have I seen something quite that specific. Maybe Memphis is dangerous for a reason:

I wonder if there is a connection....
As we entered Mississippi we saw something else new. The rest area signs proclaimed that there was security on the premises. Again, I have travelled all over the county and stopped at hundreds of rest stops over the years but none of them had security booths. Something else new, the local Wal-Mart had a greeter who stopped everyone leaving to check their receipts like they do at Sam's Club which was also weird.
Mississippi has the highest percentage of blacks in the country, over 1/3 of the population, or around 37%.

This is something I guess I knew but it is different seeing it. Where we have traditionally lived blacks are a much smaller percentage of the overall population (IN: 9.4%, MI: 13.7%, OH: 14%) and they are overwhelmingly concentrated in a handful of urban areas. Smaller rural areas have virtually no blacks and it isn't unusual to go for weeks at a time without seeing a black person.
- Drivers in the South apparently don't understand how to merge.
Yield does not mean stop. On the other hand they seemed less aggressive. Folk around here will drive right up your tailpipe if you are passing another car but not as quickly as they want you to but down there most drivers stayed well back until you get out of the way.
- I-65 running from Mobile on the coast all the way to the Tennessee border apparently only has one speed limit: "As fast as your car will go".
No cops and people were flying past me with my cruise control set at 80 mph. It is 366 miles from Mobile to the border and we covered that in about 4 1/2 hours. Also for some reason we saw more Michigan license plates than we normally do around here on I-69 even though we are only about an hour from  the border of Michigan and it confirms that Michigan drivers are among the very worst in the country no matter where they are.
- I am not much of a water person but when it does come to bodies of water, I am a freshwater guy.
There is just too much weird shit in saltwater. Creepy crawlies and jellyfish and crap. No thanks. It was nice to sit on the porch and look out at the water, just keep me out of it.
- Lots of dudes driving.
I have an older post, Women Driving Cars, that looks at the cultural shift from men doing all of the driving to women seeming to drive more often when couples are in the car together. We spent a lot of time on the highway with other people travelling long distances and when there was a distant, out of state plate, the vast majority of the cars I saw were driven by the men while the women were riding shotgun. I guess feminism is cool when you are running to the store or doing errands but when it means sitting behind the wheel for 3-5 hours at a stretch? Suddenly chivalry is cool again.
It was a fun trip, very relaxing for the most part and we got to visit four states I hadn't been to previously but I can't say I have a burning desire to go back. We are just northern folks who like going outside where there aren't animals that can kill you.
Up next for some, probably very distant, future trip: the last four states on the mainland I haven't been to, namely Montana, Idaho, Washington and Oregon.
Posted by Arthur Sido at 12:12 PM