How To Eliminate black Crime

Easy, just stop arresting black people!
Traffic Stops Are Bad Because They Discourage Black Criminals From Carrying Guns, Driving Badly, And Dealing Drugs
From the post, quoting the New York Times:
Cities Try to Turn the Tide on Police Traffic Stops
Chiefs, prosecutors and lawmakers are rethinking the value, and the harm, of minor traffic stops like the one that ended in a man’s death in Grand Rapids....
Los Angeles last month became the biggest city to restrict the policing of minor violations. In Philadelphia, a ban on such stops has just taken effect. Pittsburgh; Seattle; Berkeley, Calif.; Lansing, Mich.; Brooklyn Center, Minn.; and the State of Virginia have all taken similar steps. Elsewhere across the country, a half-dozen prosecutors have said they will not bring charges based on evidence collected at these stops.
We will come back to that in a moment. The post is from Steve Sailer and makes the crucial point about gun control that needs to be hammered home over and over. Emphasis in red mine.
As the Biden Administration has made clear, America needs more gun control laws. But what America also needs, evidently, is less enforcement of existing gun control laws on those most likely to commit murder. The point of gun control laws is to harass the people who will obey the gun control laws, law abiding white Republican hunters, while easing off on enforcing gun control laws on black criminals carrying illegal handguns.
This is part of the same movement that calls for banning the media from running mugshots of people arrested, but not yet convicted, because virtually all of the mugshots tends to be glowering black men or the occasional vacant stare from black women, like in this story: 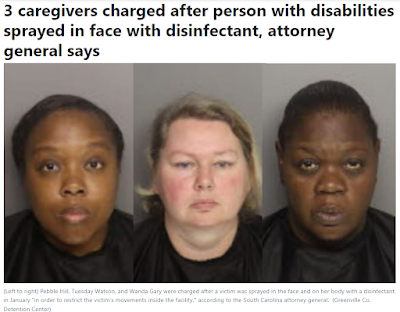 Side note, only the black woman on the left, 32-year-old Pebble Hill,  actually sprayed disinfectant in the disabled person's face, the chubby White woman in the middle and the...well even I don't have adjectives adequate to describe the horror show on the right...saw her do it and didn't report her and that is why they were arrested.
Back to the main article.
According to the police, and this has the ring of truth to it, pulling people over for minor infractions is a great way to ferret out people who are otherwise doing something illegal, like transporting drugs or driving on a suspended license or packing an illegal firearm. It is like "stop and frisk" in places like New York that helped lead to a significant reduction in murders in NYC. When you actively discourage the people most like to be illegally carrying a gun, black people, who also happen to be the people most likely to get pissed and shoot someone on the spur of the moment, murders and shootings in general go down.
There are obvious Constitutional concerns but when the Constitution was written the Founders couldn't have anticipated our cities being shooting galleries where blacks and mestizos gun each other down left and right. The people the Constitution was written to govern are about to be a minority in the country allegedly governed by that document and as such it really isn't all that pertinent especially when judges can arbitrarily rule that the Constitution doesn't say what it clearly says ("shall not be infringed", "The powers not delegated to the United States by the Constitution, nor prohibited by it to the States, are reserved to the States respectively, or to the people.") and declaring that it says things it clearly does not (you have a "right" to murder your unborn child, fags have a "right" to get "married", etc). That might be a post in itself for another day....
This has become a big issue again thanks to the shooting of one Patrick Lyoya, a black guy in Grand Rapids, Michigan. As usual, we see a little glimpse of the shooting where the police officer is wrestling with Lyoya and then shoots him in the head. What you don't see is him bolting from the cop after the traffic stop, refusing to comply with orders and then, fatally as it turns out, grabbing the cop's Taser. A Taser is a weapon, that is established, so the cop was within his rights to pop him. Donut Operator has a good breakdown of the video.
Then from the original New York Times article we read this, emphasis in red mine
Isaiah Thomas, a Black city councilman who introduced the Philadelphia ordinance, said he experienced the racial disparities in traffic policing when his mother bought him a five-year-old Cadillac DTS as a college graduation gift in 2007.
A Cadillac with a Black man behind the wheel was a magnet for the Philadelphia police, he said. Now 37, he is still pulled over at least once a year in his aging Ford S.U.V., he said — sometimes twice in the same month — and never for any reason more serious than passing on the right, a faulty license plate or an expired registration.
What is the common factor?
They were all breaking the law in some fashion.
If you want to avoid traffic stops, the very best way is to:
- Keep your registration up to date
- Don't be a shitty driver
- Don't speed
- Replace broken/malfunctioning lights on your vehicle
And for crying out loud, don't intentionally run people over in your car. Twice.
VIDEO: Road rage suspect runs over victim twice with his car, police say
This really isn't that hard.
If you are pulled over, it is usually good to:
- Stay in your car
- Provide your license and proof of registration calmly
- Don't run from the cop and certainly don't fight the cop and grab his Taser.
Again, common sense.
This is the frequently ignored critical factor in the "dey copz is jus shootin' us and sheeit for no reason" discussion. In almost every case the black guy was breaking some law and then often was escalating the problem after being pulled over.
But we can't talk about that because racism and stuff so instead we will just try to pretend blacks aren't committing crimes and simply stop arresting and prosecuting them when they do commit crimes, whether traffic infractions or fare jumping on the subway or shoplifting or even letting them loose without bail when arrested for more serious crimes.
It is a pretty foolproof plan. Stop arresting and even noticing black crime and pretty soon it will just go away. Genius!
Posted by Arthur Sido at 12:05 PM