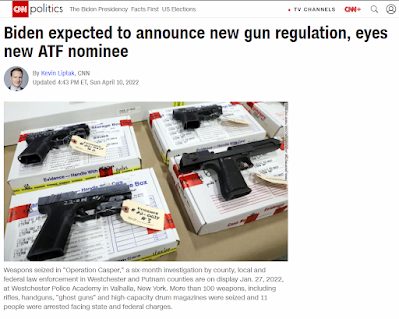 The 2A community is expecting this to be a big one.
The big news will be reclassifying "80% receivers", aka "ghost guns" as firearms even though as they are sold you cannot use them as a firearm. Other stuff might be included, we will have to wait and see what happens but apparently gun control groups are going to show up including that little faggot David Hogg who "survived" the Parkland shooting the same way I did, by not being there.
Banning "ghost guns" won't stem the tide of violent gun crime but it will make it harder for regular citizens to have firearms that aren't tied back to them via paperwork. The next hit will come likely later this summer and reclassify braced AR/AK pistols as "short barreled rifles" and that will be a bigger deal as there are already millions or tens of millions of braced AR/AK pistols out there.
It still feels like something big is also waiting in the wings. Like I keep saying, don't dawdle because the little respite we have been enjoying won't last for much longer.
Posted by Arthur Sido at 9:16 PM