Be sure to skip over the Gospel Of John in your readings on Good Friday.... 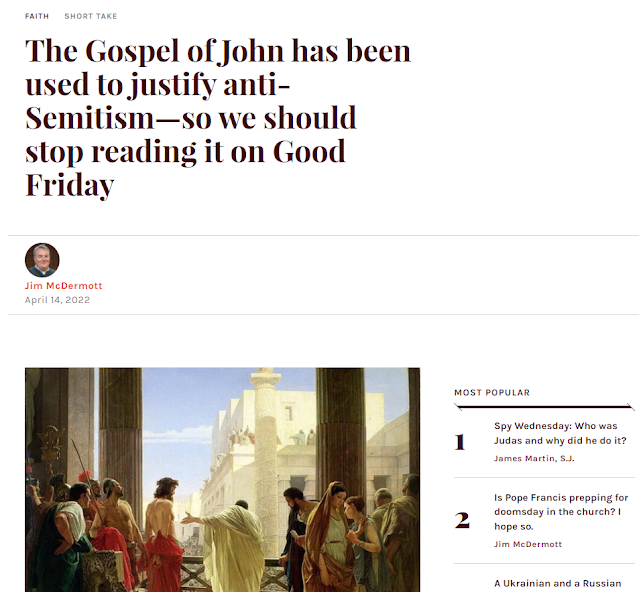 Reading the Gospel Of John is literally another Holocaust.
The article by one Jim McDermott includes some choice gems like:
"...mainstream publications like the The Daily Beast and Slate have decried it..."
You know you are dealing with a deep thinker when he considers The Daily Beast to be a "mainstream" publication. Then there is this:
"Scholars generally agree that despite how it sounds, John did not mean “all Jews.” Dr. (Adele) Reinhartz notes how John uses the term interchangeably with the Pharisees, at one point even in the same passage."
Even though that is what it says, this is why it doesn't really say that! Generally speaking the simplest and most straightforward interpretation is the best one but not when it makes you have the naughty thoughts. By the way, the scholar he quotes, Adele Reinhartz, is a Jew and therefore is at best a hostile scholar of the New Testament, including being an editor of this work:

Meanwhile the guy who wrote the article in question, Jim McDermott, you will be shocked to discover is a faggot: 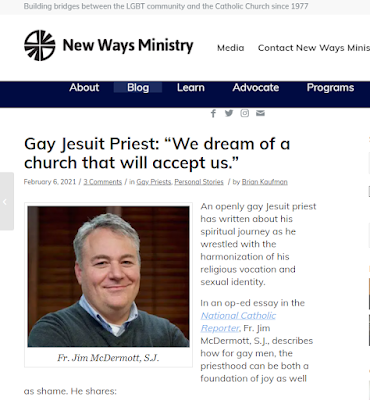 I really don't understand people who stubbornly cling to a religious faith that they clearly don't believe in and at the same time demand that this religious faith going back some 2000 years must change to allow "space" for Jim to sodomize his fellow gay "priests". From what I can tell this guy isn't an even an active priest in the Catholic Church.
The Bible is pretty clear on this part of the events of the Passion. Jesus is delivered to Pilate who finds no reason to execute him. Pilate even appeals to the Jews to allow him to be released but the Jews instead demanded Pilate release the criminal Barabbas. Rather the Jews who were gathered were of one accord as recorded in all four Gospel accounts:
And Pilate again said to them, “Then what shall I do with the man you call the King of the Jews?” And they cried out again, “Crucify him.” And Pilate said to them, “Why? What evil has he done?” But they shouted all the more, “Crucify him.” (Mark 15:12-14)
Pilate addressed them once more, desiring to release Jesus, but they kept shouting, “Crucify, crucify him!” A third time he said to them, “Why? What evil has he done? I have found in him no guilt deserving death. I will therefore punish and release him.” But they were urgent, demanding with loud cries that he should be crucified. And their voices prevailed. (Luke 23:20-23)
So when Pilate heard these words, he brought Jesus out and sat down on the judgment seat at a place called The Stone Pavement, and in Aramaic Gabbatha. Now it was the day of Preparation of the Passover. It was about the sixth hour. He said to the Jews, “Behold your King!” They cried out, “Away with him, away with him, crucify him!” Pilate said to them, “Shall I crucify your King?” The chief priests answered, “We have no king but Caesar.” (John 19:13-15)
Matthew adds in a line that is even more powerful...
Pilate said to them, “Then what shall I do with Jesus who is called Christ?” They all said, “Let him be crucified!” And he said, “Why? What evil has he done?” But they shouted all the more, “Let him be crucified!” So when Pilate saw that he was gaining nothing, but rather that a riot was beginning, he took water and washed his hands before the crowd, saying, “I am innocent of this man's blood; see to it yourselves.” And all the people answered, “His blood be on us and on our children!” (Matthew 27:22-25)
And all the people, in this case the Jews assembled, cried out "His blood be on us and our children". This is the origin of the "blood guilt" idea that collectively assigns a level of culpability on the Jews as the killers of Christ. Not saying you have to believe it one way or the other, but the reading is pretty plain. At a minimum the assembled Jews called for the crucifixion of Jesus. That isn't to say all Jews wanted this, many of the early followers of Christ according to the New Testament were Jewish, but in general the bad guys in the New Testament were the unbelieving Jews.
Anyway, no longer my circus and therefore no longer my monkeys but I wanted to pass this along so the Christians in my reading audience don't accidentally read The Gospel Of John on Good Friday.
Posted by Arthur Sido at 8:49 AM