Feeding Time At The Zoo

There is just something about the confluence of food and Africans that seems to inevitably lead to violence:

The story accompanying the video is weird as well.
All-out brawl inside Lincoln Park restaurant casts shadow over license challenge: ‘192 days…with no incidents [then] the aliens showed up and attacked us.’
Besides the fact that there were four security guard on duty (who has eaten somewhere with security on duty? Not me.), there was this bizarre quote:
Claiming “the Chicago Police Department refuses to show up in a timely manner,” Bailey said he recently offered to pay the city to post an on-duty police unit outside Dinner and a Movie during peak hours. They turned him down, he said.
“They’re being reactive. Everywhere I look, I’m under attack,” he continued. “The structural racism I’m dealing with is if you need police at your business, then the business is the problem.”
Why should police post a patrol car outside his business when so many others operate without a dedicated police unit?
“I have Black customers … There may be something that may occur. What is the demographic of the crime [in Chicago]?” Bailey asked. “Based off the numbers … there are bad people in the bunch. They came in [Saturday] night. We haven’t seen them in eight months.”
“They’re not Black people. They’re aliens and they sneak in,” he continued. “I don’t want Black terrorists. They terrorized my customers and my business.”
Dafuq?
Yes, the structural racism of a place that has this menu: 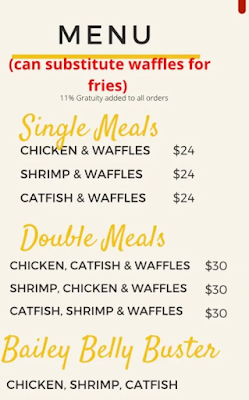 Something and waffles seems to be the menu. Notice they automatically add in an 11% tip because otherwise it is safe to assume their servers are getting 0%.
Their Instagram is full of pictures of black folk and the occasional complaint about the po-leece killing them for no reason at all.

This post is referring to the death of Glenn Foster, a former NFL defensive end listed at 6'4" and 285 pounds, who was arrested for going 92 in a 45, leading police on a chase, and resisting arrest. He later was charged for assaulting another inmate while trying to steal that inmate's socks. At some point this guy died while in custody. I guess that is more important than the thousands of blacks killed by other blacks.
Anyway, it might be a good idea to stay clear of any place selling catfish and waffles that automatically adds a gratuity to your check...
Posted by Arthur Sido at 9:00 AM