Elon Is A Hiccup Not A Sea Change

You might think that Elon Musk taking over Twitter is a huge victory for free speech and that the tide has turned.
Shame on you if you believe that given all the we know about Them.
Maybe Elon will make Twitter a more open forum, maybe not, but in the meantime They are hard at work setting the stage for increased censorship no matter what happens at Twitter. It is happening all the time, all around you. For example....
The great lesson learned by the Left in 2016 is that people still have a spark of independence and if you don't police every thought and utterance, they might go off script. Instead of nominating a sacrificial lamb like Marco Rubio or, snort, John Kasich to lose gracefully to Hillary Clinton, the Normiecons nominated Donald Trump. To add insult to injury, these same people (and a lot of Democrats) showed up and elected Orange Man Bad! The horror! You can be sure that in meetings across the Leftist political machine it was decided that they would never let that happen again. How would they prevent it? By censoring speech that deviated from the agenda. Trump won because his campaign message resonated with people, especially White people. His message got out all over the place. That was the problem.
Do you think that the ridiculous "Russia, Russia, Russia!" narrative was legitimate or even based on a shred of reality? Of course not. It was a narrative to cast doubt on Trump's election and, this is critical, to create the framework for future censorship and outright theft of the 2020 election.
Last week Barack Obama published a piece titled: Disinformation Is a Threat to Our Democracy taken from a speech at Stanford. 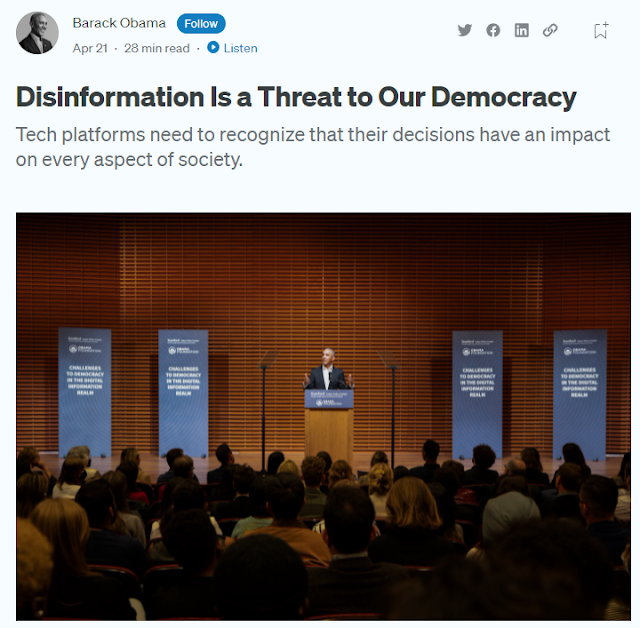 I don't know if he actually wrote the speech, despite the rhetoric Obama was at best a middling intellect. He was good at delivering a prepared speech that someone else wrote for him. A great thinker? Not hardly.
His speech was timed just a few days before the sale of Twitter to Elon Musk went public. I doubt that is a coincidence. The entire speech is just a series of talking points. Putin Bad, Trump Bad, January 6th was a violent insurrection, America is in danger from White supremacists, etc.
Here is the gist of what he is really saying.
But while content moderation can limit the distribution of clearly dangerous content, it doesn’t go far enough. Users who want to spread disinformation have become experts at pushing right up to the line of what at least published company policies allow. And at those margins, social media platforms tend not to want to do anything, not just because they don’t want to be accused of censorship, because they still have a financial incentive to keep as many users engaged as possible. More importantly, these companies are still way too guarded about how exactly their standards operate, or how their engagement ranking systems influence what goes viral and what doesn’t.
Right now content moderation on social media, other than on Gab and to a lesser extent other alt-tech sites, is entirely one sided.
Then we get, totally coincidentally again, a new "Disinformation Governance Board" and if that isn't the most Orwellian thing you have heard recently, I don't know what is.
Mayorkas testifies DHS is creating 'Disinformation Governance Board'
The news comes two days after Tesla CEO Elon Musk secured a $44 billion deal to buy Twitter
Huh, go figure. This new Governance Board is going to be led by one Nina Jankowicz. According to her website she is "an internationally-recognized expert on disinformation and democratization". Oh really? Here is the 33 year old Jankowicz..... 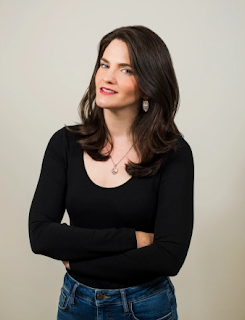 That is quite the chin. This is the best glam job they can do on her and it didn't really help.
As far as I can tell, she has never had a real job, just made-up bullshit roles like "disinformation fellow at the Woodrow Wilson Center". I am sure that is a totally serious and necessary job. This serious intellectual did a Tiktok video of herself singing a rendition of Supercalifragilisticexpialidocious from Mary Poppins with the lyrics changed to her completely adult understanding of "disinformation". Tucker Carlson rightly tore her apart last night....
He broke out the patented Tucker laugh several times because the whole thing is so ridiculous, including this quote from her book....

Even by Tucker's standards he really smacked her around. She deserved every ounce of mockery and then some. This is the same woman who repeated the bullshit about the Hunter Biden laptop being a "Russian disinformation conspiracy" even though it turned out to not be a hoax but the media pretended it was to protect Biden: WH pick for Big Brother-like disinformation board spread lie about Hunter Biden laptop
Someone who is a complete stooge for the Left is going to decide what is or is not "disinformation" and as Tucker and others have pointed out, the new Ministry Of Truth is part of the Department Of Homeland Security, an armed state security apparatus that does just about everything but securing the homeland.
Meanwhile as people like Taylor Lorenz are free to doxx people on the Right, we are told that doxxing is bad but only when it happens to good people. When bad people get doxxed, it is "exposing extremists". 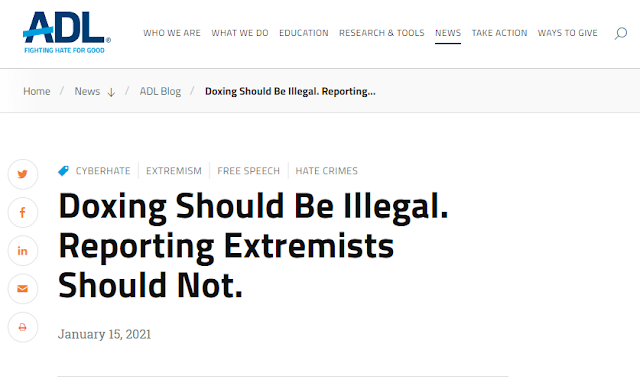 That is pretty handy. Here are the rules for people we like and here are completely different rules for people we don't like. Who gets to decide who the "extremists" are or are not? The ADL of course, itself a far-left extremist anti-White hate group.
This is how it has been for decades and Normiecons fume about it but no one does anything about it.
Structurally the system is stacked against anyone on even the most moderate definition of the right-wing. Elon Musk buying Twitter is awesome for the tears it generated and Twitter might be fun again, at least for a short while, but it doesn't change the fact that we are censored and propagandized in ways that the Soviet Union could only dream about. It is only going to get worse and that is why you need those local connections and alternate comms. The life expectancy for blogs like this one are measured in at most a few short years.
Prepare accordingly.
Posted by Arthur Sido at 9:06 PM