Deism: The Great Religious Reordering Of The West

The West is in the midst of the greatest religious reordering since Martin Luther nailed his 95 Theses to the church door in 1517. At the time that Luther asked those questions the church in Rome held totally domination over Christendom. Straying from declared orthodoxy could be and often was lethal. Once the fuse was lit in 1517, nothing could stop it. The end result was a massive schism in the Christian faith in the West rivaled only by the Great Schism between West and East in 1054. Some of Europe remained Roman Catholic while other parts became Protestant. What you were depended mostly on where you lived. Many of the political boundaries and wars in Europe can be directly traced to which religious tradition a nation followed.
In the United States we saw the first attempt to blend European ethnic and religious groups, mostly with success although it took a long time. My Polish father marrying my Irish mother caused some grumbling in both families but by the time I was a teen and young adult those ethnic differences didn't mean as much. Apart from recent immigrants you are hard-pressed to find an ethnically pure White person in America, most of us are a blend of various European ancestry.
For most of the history of the United States, our people were marked by their religiosity if not their devotion. In general that public religiosity has been some form of cultural Christianity, Roman Catholic or Protestant. There have always been outliers, Eastern Orthodox in ethnic enclaves or the smaller sects like Quakers and the various Anabaptists such as Amish and Mennonites. Jews have been here for a long time in small numbers and Muslims have increasingly become part of the religious tapestry but mostly the religious conversation in America is culturally Christian. Easter and Christmas are big holidays with Christian connections (yes I know that there is some dispute over that). If you wanted to be President you usually had to show at least some level of public religious devotion. This chart shows the religious backgrounds of Presidents through 2009. 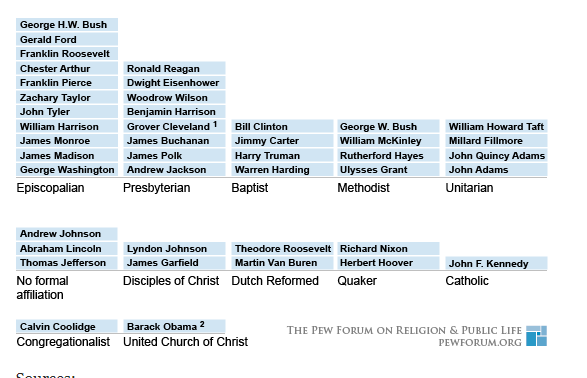 Trump is listed elsewhere as a "Protestant" but I have always found his newfound religious faith very suspect. Of 46 U.S. Presidents only three have had no formal religious affiliation: Thomas Jefferson, Abraham Lincoln and Andrew Johnson. That is interesting in that two of the those are some of the most famous Presidents in our nation's history, having their own monuments and are featured on Mt. Rushmore.
But a change is brewing in American religious landscape and it will deeply impact our public life. I saw this tweet the other day.... 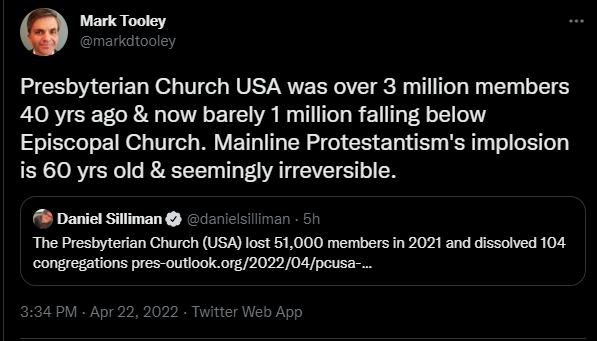 One million members probably equates to a few hundred thousand actual active members who attend church more than on Christmas and Easter.
Mainline Christianity is nearly dead in America and yet that is the affiliation of most Americans, especially most Presidents, for most of our history. It played an enormous role in our political process. The Episcopal Church was once known as the Republican Party at prayer, that is the GOP was the East Coast, WASP, well to do party while the Democrats were the ethnic Catholic working class.
Today things are completely different. In a recent post, The Dissident and the Christian, The Zman made this statement...
It is fair to say that this is the worst time for Christians and Christianity in the West since the Roman empire. In order to promote equality, liberal democracy has created protected classes of people who cannot be criticized. The other side of this are people who must me mocked and ridiculed. Christians were the first group placed in this category and remain the popular object of ridicule in the West. There is no prohibition against overt hatred of Christians in most Western countries.
But then he makes this point.
It is not all bad news for Christianity. The faithful are slowly realizing that for their faith to survive this age, it must live outside this age. Christians are reverting to what all persecuted minorities must do. They are learning to live in the shadows and think of themselves as the outsider.
This is something I wrote about a lot on my old blog. The Christian faith is not really designed for comfort and power, it was in the beginning an outcast, persecuted faith. At some point the Christians stopped being the persecuted and took over the halls of power, in turning becoming the persecutor. Most of the Christian martyrs in Europe were murdered by others claiming to be Christians. The church in Europe and North America bears little resemblance to the church of the first few hundred years. However, as the marginally believing church members drift away and being a Christian carries with it some real social cost, what remains of the church will be far stronger.
This can have a profound impact on the world of dissident politics. Again from The Zman...
This presents a challenge and an opportunity in dissident politics....
....there is a slow rapprochement between the secular dissidents and the growing number of dissident Christians. The former is coming to understand the defining role not just of belief but of structured rational belief. The latter is coming to terms with the reality of their situation. For the West to survive and resurrect itself after the horrors of liberal democracy, it will need a new set of core beliefs, based in the old ways shaped by the experience of the crisis.
For me as a former Christian who still deeply believes in a Creator, this gives me a lot of hope.
I still see far too much religious squabbling among the dissident right, especially on Gab where you can still call someone a faggot. Many Deus Volt Christians scorn the "pagan unbelievers" on the dissident right while some of those who are more like me on the spectrum of faith distinct from organized religion, whether deists or pagans or agnostics, call dissident Christians slurs like "Christ-cucks". It is incredibly counter-productive and I assume many of those who are doing this are either Leftists with sock puppet accounts or Feds.
Without the support of the powers that be in society, *actual* Christians are going to be out in wilderness. They will find many other marginalized dissident groups out there. They will have a choice to either be willing to accept our differences and work together for the survival of our people or see themselves wiped out, often by non-Whites who claim to be of the same faith.
In no way am I suggesting that dissident Christians compromise their faith, simply to recognize that our people must band together if we are to survive the great winnowing that is coming. As a people we share a common enemy and for the sake of our people we must work together despite our differences. The great religious reordering of the West makes this a priority for the future.
Posted by Arthur Sido at 1:04 PM