As Predicted By Every Sane Person: The Much Anticipated False Flag Attack In Ukraine

This is being reported by the Kiev "Independent", an outlet with 2 million followers on Twitter. Screenshots taken by me on April 11th, 2022. 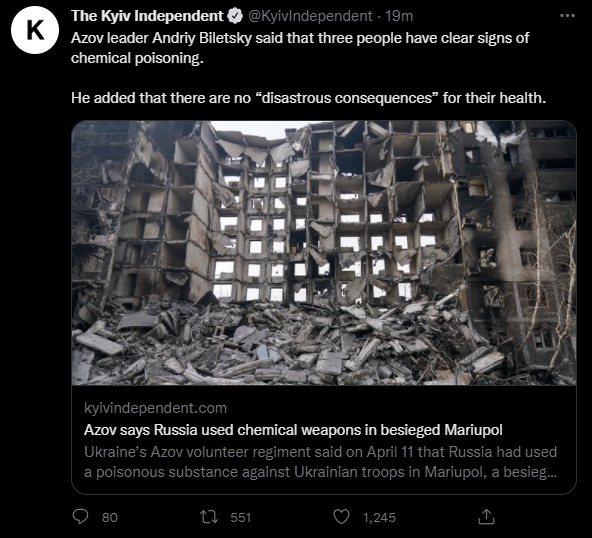 If you have been following along, Andriy Biletsky is the first commander of the Azov Battalion, widely referred to as a literal Neo-Nazi group right up to the invasion of Ukraine by Russia. He also co-founded the Ukrainian Social-National Party of Ukraine, which uses those two magic words, National and Social, in reverse order from the more famous version, German National Socialism more commonly known as Nazism. The party used the "Wolfsangel" logo... 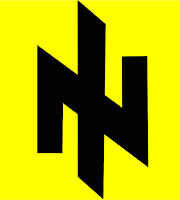 That is reminiscent of the logo of a number of Wehrmacht and SS divisions in the Third Reich.
To be clear, my issue is not with Biletsky or Azov or the Social-National Party. I imagine we would have a lot we agree on. But it does seem a little odd that we are being told to accept that Russia used a chemical weapon, distributed by a drone?, that managed to sicken three whole people based on a statement from a guy who, if he were in America, would be considered the embodiment of evil.
Does that make any sense?
Why would you risk using a WMD that would trigger international outrage but only squirt a tiny amount that impacted all of three people? What strategic goal is accomplished by making three people sick with a drone that you couldn't have achieved by strapping a bomb to a drone?
This is obviously bullshit but of course people on Twitter are screaming bloody murder about it.
Make no mistake, the goal is to get the U.S. pulled into this war and the longer it goes on thanks to our dangling of aid keeping Ukraine from suing for peace, the more likely we are to get pulled into this conflict.
Posted by Arthur Sido at 6:33 PM