In my half century of life on this clown car called Earth, I have seen lots of ups and downs but nothing was quite as awful as 2020. For most people it was a nightmare of burning cities, lockdowns, economic devastation, endless "Covid death" scoreboards, mask mandates and restrictions on the most basic human interactions. Between the "vaccine" long term health effects and the emotional trauma of the lockdowns, masking and social distancing, the ramifications of this fiasco will echo for many years to come.
Looking back in April of 2022, it can seem like we are through the worst of it. Mask mandates are being shot down left and right. No one pays attention to social distancing rules. Testing and vaccination centers are closing down. Life is approaching normal. Many people are breathing signs of relief, thinking that they are free and clear of this nonsense.
Don't be fooled.
With each passing month it is becoming more apparent that Covid-19 was a trial run of sorts, whether it was a fortuitous accident in China that was manipulated by the elites or whether it was intentional from creation to "escape" to response. The response to Covid-19 has all the earmarks of being a test to see how people would react, how quickly they would comply and how far they could be pushed. By any measure the results are delightful to would be tyrants. The willingness and often even eagerness of so many Americans and people in the West to slavishly comply with each new indignity and often beg for even more restrictions on their lives to be imposed was revolting and alarming. For anyone who had wondered how it was so seemingly simple for the East German Stasi to get Germans to inform on each other, the answer should be starkly clear: lots of people love having a boot on their neck, especially if they can make others suffer at the same time.
This brings me, as is so often the case, back to The Great Reset, the nightmarish dream of the global elites to recreate human society and even humanity itself in their own image.
In order to effect The Great Reset, several things have to happen.
One is a cataclysm to all of the global structures that have sustained civil society for the last century. Some of these cataclysmic steps are slow moving, for example the infiltration and intentional degradation of the educational system and the Christian faith. Others are happening more suddenly, most obviously the economic collapse that appears to be cresting like a tidal wave that will see the U.S. dollar replaced as the world's safe haven reserve currency at the same time the U.S. itself is toppled from her perch as the world's economic superpower. Only once the existing structures have failed can a new, glorious order replace it with a technocratic feudalism.
Two, the people who are most likely to cause problems for the plan, specifically heritage Americans, need to have a reflexive obedience to authoritarian dictates, no matter how damaging and ridiculous. Why else would we see ludicrous decisions like the extension of the mask mandate on planes for two weeks? There is no plausible explanation for this two week extension that was thankfully tossed out other than the simple fact that the requirement to wear masks is ritualistic humiliation intended to crush independent thought and action via government diktat and social shaming. They wanted to make you keep wearing paper masks on an airplane for no other reason than they could.
Three, the global population needs to be reduced by a significant percentage. We have already seen this happening in the West with the multiprong assault on White and East Asian families such that we now have most White and East Asian nations at below replacement levels of reproduction. The tools they used are myriad but we know many of them: rising costs for housing and the raising of children, shaming women away from their natural calling as mothers, easy divorce, contraception, abortion and of course the push to pervert our children into homosexuality, transvestitism and other once unimaginable degeneracy that reduce human sexuality into a sterile perversion of it's natural function.
All that remains now is for the last, big push that will topple society and leave people clamoring for something, anything, to stem the chaos.
As usual, the powers that be are openly telegraphing what they are going to do and "The Big One" might be closer than you think. Enter Dr. Robert Redfield, the former director of the CDC under Donald Trump. Dr. Redfield recently made an appearance where he issued an ominous prediction: 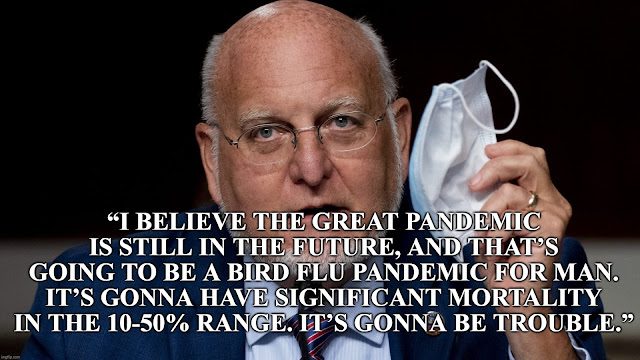 The full quote is available in this article The Next ‘Great Pandemic:’ Astronomical Death Counts Now Being Telegraphed and Marketed to the Public but I will copy it here. Read these words carefully:
“Yeah, I think we have to recognize – I’ve always said that I think the Covid pandemic was a wakeup call. I don’t believe it’s the great pandemic.”
“I believe the great pandemic is still in the future, and that’s going to be a bird flu pandemic for man. It’s gonna have significant mortality in the 10-50% range. It’s gonna be trouble.”
Robert Redfield—Former CDC Director, March 30th, 2022 interview with Doug McKelway on “Center Point”
Even 10% global mortality would mean numbers like 600 million dead.
There are a couple of choice quotes that I want to share from the linked article. First....
Every announcement and every warning by the state is by design, as nothing is what it seems, and all is based on the indoctrination and psychological manipulation of the public in advance, so as to lessen the risk of exposure to the state once any real weaponized ‘virus’ is released, or any fake pandemic scenario is announced.
Very true. They can say "well, we warned you!" without having to explain how they always seem to know when a disaster is coming, because that might suggest they know it is coming because they engineered it in the first place. As the author wrote later in the piece:
How can they predict the exact future? It is because they are perpetrating and purposely creating that future. This is what should be called the plan to commit criminal mass genocide.
They tell you what will happen, they make it happen and then they declare that only they can fix it but it will require your complete obedience to every order and dictate. Another important quote:
What is going on here is not just about another pandemic conspiracy, it is also part of the plot to vastly curtail the food supply, all in the guise of animal transmission of a human lab manufactured bioweapon called ‘avian bird flu.’ By targeting animals as a risk to spread flu to humans, the slaughter of domesticated and wild animals will gain more support from this ignorant population. The elimination of meat as a food source in favor of lab grown GMO poison is now being pursued actively, as the regulation, control, and eradication of private farms and ranches is now underway. This can eventually lead only to corporate farms in strict adherence to government and pharmaceutical guidelines meant to destroy the quality and quantity of our food supply.
If you think food prices are crazy now, you ain't seen nothing yet.
3 Factors Which Are About To Make The Coming Food Shortages Even Worse
Bird flu, awful wheat harvests, new Covid lockdowns in China, the war in Ukraine. Ugly all around.
And gas prices are potentially going to leap upward again....
EU To Impose Full Embargo On Russian Oil Next Week, Will Send Price Above $185 According To JPMorgan
All of this spells more human misery and suffering, on a scale we haven't seen since World War II and likely it will be much worse. What makes it even more evil is that it is intentional. Those who survive are facing a grim, dystopian future that might make the old saying true, the living will envy the dead.
I've said it before. The near term future is going to make us look back on 2020 as "The Good Old Days" when we were just in the "Mass Genocide Qualifying Lap" stage.
Posted by Arthur Sido at 6:00 AM