A few weeks back there was a mass shooting at a hookah lounge in Vegas with 14 people shot, one fatally. A couple days after the shooting the name of the victim was released, one Demetreus Beard, who as you can probably guess was a black fella.

Well the po-leece done arrested a suspect and he looks just like you would expect.... 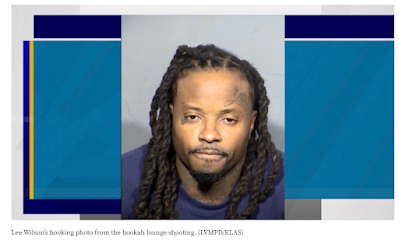 I-Team: Video shows Las Vegas hookah lounge mass shooting suspect in prior gunfire
...Lee Wilson, 44, faces one charge of murder and 12 counts of attempted murder for the shooting Saturday, Feb. 26, at Manny’s Glo Afterdark Lounge on East Sahara Avenue near Maryland Parkway.
Police said Wilson fired at least two dozen rounds at the unlicensed hookah lounge as people celebrated a birthday, court documents obtained the 8 News Now I-Team said.
Dude is 44 years old and out shooting up a hookah lounge.
You will also be stunned to learn that this was not Lee Wilson's first encounter with Johnny Law. In fact we have a little collage of mug shots to go with the one above. 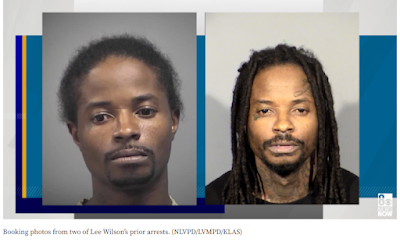 It just so happens that one prior incident was a lot like the hookah lounge mass shooting. Starting to see a pattern here.
In an incident in December 2018, a video shows Wilson and a group of other men leaving a bar near Flamingo Road and Arville Street when Wilson and two others start firing, prosecutors said.
I bet they really threw the book at him!
Several people were hurt in the shooting. Wilson was charged with two counts of attempted murder and other gun-related charges.
Wilson ended up taking a plea deal for one count of discharging a firearm into an occupied structure or vehicle and sentenced to a minimum of one year in prison.
Oh. Prior to that, in 2002, he done shot some dogs, perhaps in a bid to start a career in law enforcement.
In 2002, Wilson shot two dogs in North Las Vegas, injuring them. A judge sentenced him to more than a year in prison.
Glad to see he got more prison time for shooting two dogs than shooting at some people. In between the 2002 puppy shooting and the 2018 bar shooting, Lee Wilson was on a team of rocket scientists preparing for a manned mission to Uranus while also serving as the president of the local Rotary Club and leading a men's Bible study. Just kidding!
During Wilson’s initial court appearance for the charges stemming from the hookah lounge incident, a prosecutor pointed to Wilson’s extensive criminal history dating back to 1995.
It includes 82 arrests and nine felony convictions, records showed.
82 arrests and 9 felony convictions.
9 felony convictions.
If I am doing my math correctly (Jim help me out here), 1995 to 2022 is around 27 years. 82 arrests in 27 years works out to more than 3 arrests per year and an average of a felony conviction every three years.
The obvious question here:
What is Lee Wilson doing walking around free to shoot up hookah lounges? For that matter, why is he still breathing?
If he was arrested 82 times or 3 times per year for the last quarter of a century, that certainly suggests that the guy was committing way more crimes that he was never arrested for. It is safe to assume that he was committing some sort of crime on monthly basis, or more likely even more frequently. The guy is 44 years old and his record goes back to when he just turned 18, so we have no idea how many arrests he had prior to those 27 years but I am guessing at least a few. The guy has never spent a year as an adult not being a piece of shit but the system keeps letting him out even after 9 felony convictions.
While Nevada technically has the death penalty, they haven't executed anyone since 2006 so basically it isn't in force. Lee Wilson will probably spend the next 30-40 years in a Nevada prison at enormous expense when he should have been taken out back and put down 6-7 felony convictions ago. Instead he is roaming the streets, shooting 14 people for whatever reason. One is dead, at least one is now paralyzed and that means an expensive ward of the state for the rest of their life.
The article closes with this forehead slapping series of sentences...
“How are you even free, like, on the streets?” Vannesha Bradley-Martin, Beard’s friend, said Monday. Bradley-Martin and Beard have a child together.
Bradley-Martin was in court for Beard’s scheduled preliminary hearing, which was postponed to April. Wilson remained confined to a wheelchair. He previously said he was shot six times in the incident.
“Not only was Demetreus shot, his other son’s mom was shot too,” she said. “My stepsister hurt herself in this.”
His other son's mom was shot. I am sure that poor kid will grow up to be a wonderful citizen.
14 people shot by a man with 82 arrests and 9 felony convictions. I bet you won't see this on the evening news. If 14 people had been shot by a White guy wearing a MAGA hat though.....
Posted by Arthur Sido at 3:57 PM