Whookah Can It Be Now?

The completely ignored mass shooting in Vegas over the weekend where 14 people were shot with one killed now has a name to go with the death:
Man killed in mass shooting at hookah lounge identified
The person killed in a shooting at a Las Vegas hookah lounge over the weekend that left 13 other people injured has been identified.
According to the Clark County Coroner’s Office, Demetreus Beard, 33, died from multiple gunshot wounds.
This is apparently Demetreus... 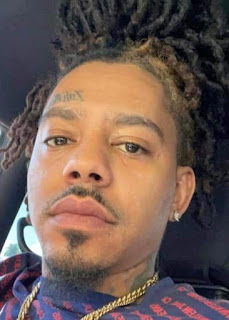 He looks like a nice fella and not at all what I expected to see. Also why do people get tats on their damn face? That must hurt like hell and 100% of the time it looks stupid.
How did this all go down?
According to Metro police, there was a party at the lounge and a fight broke out between two people which resulted in gunfire being exchanged. In all, 14 people were shot, two are in critical condition. Beard was pronounced dead at the scene.
How predictable and tiresome. Two black guys get into a tussle and instead of taking it outside and fighting like men over this squabble, they apparently both pulled guns in a crowded lounge and started shooting. Was the dead guy one of the guys fighting? No idea, it is just as likely he was a by-stander. When two brothas start to shoot at each other and 14 people get shot, the job of untangling the mess can be difficult.
I'll keep an eye on the story but I doubt you will see much about it unless you are specifically looking or maybe live in Vegas.
14 people shot in an American city and the media that is oh so concerned with "gun violence" pretty much yawns in response. It almost seems like their primary concern is not "gun violence" after all....
Posted by Arthur Sido at 9:21 AM