Our own little South Africa style "truth and reconciliation" tribunals aren't far off. It will be short on "truth" but long on "reconciliation" as long as that word translates to "Lots of gibs for non-Whites".
Original Link Here
Jared points out that the proposed budget for this commission would be 10% of the defense budget or around $73 billion per year, paid for by White taxpayers and paid to non-Whites, with most likely siphoned off by black clergy and "community activists". He also points out that it is also a sum that is more than triple the current budget allocated to NASA. This brings to mind my post: The Dumbing Down Of America.
Our future could be space exploration and amazing advancement in the arts, science, medicine and culture. Instead we get the greatest country on Earth mutating into a third world shithole. Kind of makes you wonder what we "won" in World War II. 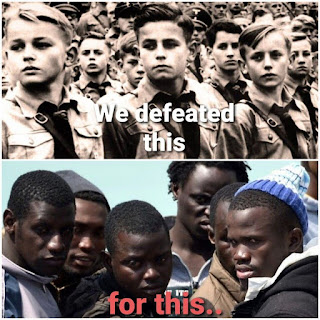 These people will settle for nothing less than the humiliation, degradation, subjugation and eventually the extermination of Whites for our unforgivable crime of not sucking at life.
We are entering a brave new world where the sole purpose of the government is to do openly what it has done stealthily for decades: loot the productive American people to benefit the elite in the name of the poor, violent and indolent.
Posted by Arthur Sido at 4:13 PM