We Wuz Assternotz And Sheeit!

They weren't able to invent the wheel but let's put them on the moon!
Reader 4hawks shared this story and it is about the most 2022 story you can imagine.
NASA Pledges to Put Woman and Person of Color on the Moon in 2025 — White Men May Not Apply
A "person of color"? These mythical PoCs seemed to have trouble figuring out basic stuff on their own but now that White men have figured out space travel, they can once again piggyback on our achievements. It brings to mind the risible Hidden Figures movie that fictionalized the minor contribution of one black woman at NASA by expanding her into three black women who were the ones that really got us to the moon.
The truth of the moon landing is not as palatable to modern eyes and ears. The person who did the actual work that the black women in Hidden Figures are credited with looks awfully White to me and is named Jack Crenshaw: Why Not A Movie About Jack Crenshaw?—The White Man Who Actually Did What HIDDEN FIGURES Credits To Black Women
And who can forget the White man that developed our earliest rockets and ballistic missiles, a man who later became the director of the Marshall Space Flight Center and designed the Saturn V rocket that launched the moon lander into space, a man often called the father of space travel and the American lunar project? That man was named Wernher Magnus Maximilian Freiherr von Braun, or more commonly just Wernher von Braun and he....well he was about as different from a black woman as you can imagine. Here is Wernher with some of his buddies before the came to the U.S.. He is the one not in uniform. 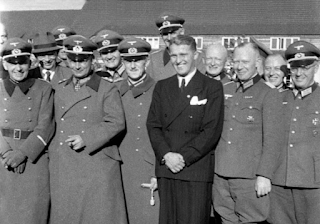 He wasn't just a Nazi, he held a number of ranks in the Schutzstaffel, better known as the SS, culminating in the rank of SS-Sturmbannführer, the rough equivalent of a Major. His connections to the Reich are downplayed by contemporaries because it is awkward but I don't think you get to that rank without being at least mostly down with the program. In short the people who got us to the moon and in space in general looked more like a Third Reich recruiting poster than a silly historical revisionary film. It makes you wonder what might have happened if Hitler had a little more time to perfect some of the rockets and other advanced weapons that men like Wernher von Braun were working on.... 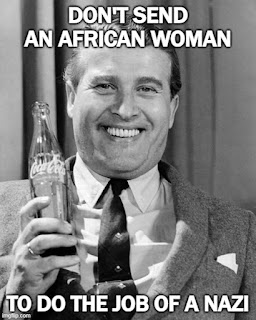 For more about the historical revisionism and general dishonesty of Hidden Figures, see: HIDDEN FIGURES Myth Dissolves—It Wasn't Blacks Who Got America To The Moon, They Actually Wanted To Stop It
As Paul Kersey points out, not only were blacks not instrumental or even significant in the moon landing and space program, they saw the whole thing as a "White thang" spending money that should have gone to black people via social programs. They got what they wanted and our once bright future of space travel was derailed. I wrote about this at length in my post The Dumbing Down Of America.
Finally you can read more about von Braun here: This Is Rocket Science
Back to the original post.
In the spirit of fairness, the Gateway Pundit as usual is overstating the point and in this case being a little dishonest. NASA is promising to send a woman and a person of color to the moon in three years but not only women and PoCs. A moon landing will likely have a crew of at least 3-4 people so likely a token woman and/or a token African but the other members are more likely to be boring old White men to make sure everyone arrives and returns safely.
What is even more amusing is that the original story linked by Jim Hoft at GP is from MSN and the woman who is featured isn't a black wahmen at all but instead is named Jessica Meir. Here is the headline that Hoft didn't share:
Jewish-American astronaut Jessica Meir may be first woman on the Moon
Here she is. 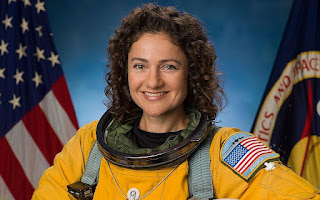 You can hardly tell she is Jewish....
As reader Jim commented in response to the story....
That's kinda funny.
NASA's not putting living creatures of any sort on the moon in 2025. That's less than four years from now. The only way they put Dantequs, Shaniqua, or Trigglypuff on the moon in 2025 is if they pay the Chinese or the Russians for tickets.
And that's assuming the Russians or Chinese are foolish enough to spend the money to do so. Which I doubt.
NASA? Given unlimited funding, I doubt NASA can even return to manned orbital flight by 2025. Unless, again, they buy a ticket, from Ivan, Chong Li, or Elon Musk.
The last time anyone walked on the moon was Eugene Cernan in December of 1972, a few days before I turned a year old.
We aren't the same country now. Like Jim I don't think NASA is going to send people into orbit by 2025 and landing on the moon is a much bigger task. In fact I don't think we could send a moon landing by 2025 even if we really wanted to and invested the money and resources. The moon is orbiting the Earth at an average speed of 1.022 km/s which works out to 3,679.2 km/hr or over 2200 miles per hour. To hit that with a lander requires a lot of complex mathematics that I don't know that we are able to do today, even with supercomputers. The calculations are probably doable but building a new lunar lander that can turn those calculations into a real landing? Yikes. Not to mention that women are notoriously terrible at parking.
The idea of sending a woman and a person of color to land on the moon makes for a nice press release for NASA but we aren't sending anyone to land on the moon, not in the foreseeable future. They will have to be content with an affirmative action pick for the Supreme Court.
Posted by Arthur Sido at 10:31 AM