Thanks For Keeping Me Safe!

What a load of malarkey.
Biden’s Crypto EO Weighs Climate Change, Ponders Digital Dollar
Oh good. That seems like an awesome idea.
President Joe Biden’s Wednesday executive order on cryptocurrency outlines a range of new policy objectives and measures, including language on the climate-related effects of cryptocurrencies and on the potential for a U.S. central bank digital currency (CBDC).
“We must take strong steps to reduce the risks that digital assets could pose to … climate change and pollution,” the executive order states; “climate change and pollution” come at the end of a long list of prospective dangers.
Section 5 of the EO, “Measures to Protect Consumers, Investors, and Businesses,” includes a subsection, (b) vii, telling the Director of the White House Office of Science and Technology Policy (OSTP) to lead work on an interagency report examining climate and energy concerns around cryptocurrency.
Gotta love the name "Measures to Protect Consumers...". As is always the case, the name is the opposite of what it says, sort of like the Patriot Act which is the very antithesis of patriotism. This executive order isn't about "protecting consumers", it is about clamping down on crypto because it is a way for citizens to conduct financial transactions outside of the control of the Feds.
Who is heading up this department? One "Alondra" Nelson.
The OSTP is currently led by Alondra Nelson, a social science professor at the Institute of Advanced Study with a doctorate in American studies, who has been a member of the World Economic Forum’s Network on AI, IoT, and The Future of Trust.
Wow, a social science professor! 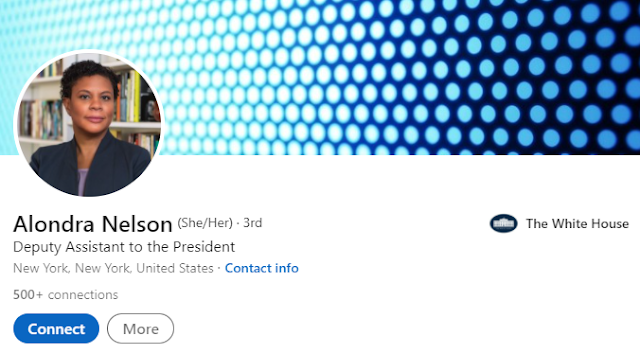 What qualifies her to be the "Director of the White House Office of Science and Technology Policy (OSTP)"? Well she has all of the qualifications needed to be an Associate Justice Of The Supreme Court, namely she is an African and has a vagina (probably). Besides that she has held a slew of bullshit jobs like "Director, Institute for Research on Women, Gender, and Sexuality" at Columbia, "Blue Ribbon Health Advisory Committee" for the NAACP in Connecticut and "Founding Co-Chair, Women's, Gender and Sexuality Studies Council" also at Columbia. Her academic background includes a B.A. in Anthropology and a Ph.D. in American Studies. This led to her writing some exciting and important papers like "The Social Life of DNA: Race, Reparations, and Reconciliation after the Genome", "Genetics and the Unsettled Past: The Collision of DNA, Race, and History" and "Body and Soul: The Black Panther Party and the Fight Against Medical Discrimination".
Well that is an impressive resume that has absolutely nothing to do with science and technology! Did I mention she is black and female?
If you believe that the real issue here is the impact of cryptocurrency on "climate change"...well then you are a moron and should go somewhere else.
What is really unfortunate is that crypto turned into a speculative bullshit "investment" instead of just being a way to engage in transactions without a by-your-leave from the government and Big Banks. Still, you can see that they hate the idea of me buying something from you without them getting a taste and are going to try to stamp it out.
The other part of this executive order deals with "U.S. central bank digital currency (CBDC)" and if that isn't a phrase makes your alarm bells start ringing, wake the eff up.
Biden’s EO instructs the Secretary of the Treasury Janet Yellin, to lead the development of a report on the future of money and payment systems. It also requests a report from the Chairman of the Federal Reserve Jerome Powell, addressing whether a CBDC could make the monetary system more efficient while enabling monetary policy to serve as what the EO called a “critical stabilization tool.”
A "critical stabilization tool" would make everything even less stable. See the pattern there? As "money" becomes more divorced from currency as currency itself is no longer tied to anything tangible, economic transactions become more concentrated in the digital realm. That in turn makes it far easier to create economic chokepoints. For example, right now if someone wants to purchase a firearm from me they can pay in cash and the transaction doesn't show up electronically anywhere other than as a record of a background check being run. But if everything is digital, "they" can decide that you aren't allowed to use their digital currency to buy firearms. There are already lots of credit card processors, most of the largest firms that serve the small business marketplace, that will not do business with gun stores, leaving us at the mercy of a handful of generally shitty card processors.
By shifting to a "central bank digital currency", those sorts of policies move into the Federal realm. You really don't want to give that sort of power to the people who work in D.C..
There are many pieces moving in this area. See my post Driving Us To A Cashless Society for a refresher on the proposal to require banks to report all cash exchanges in personal bank accounts over a certain threshold, allegedly to catch tax cheats but really to discourage the use of cash and to drive more people to use nothing but electronic means of exchange.
Of course none of this is about "safety" or "climate change" or "efficiency". It is simply about creating a new means of controlling people like you and me, keeping us in line and muzzling political dissent. If you haven't already, start planning your exit from the globalist system as much as you can.