It isn't bad enough for a TV talking head like Sean Hannity to call for the assassination of Putin, we also have a sitting U.S. Senator doing the same. In this case it is the loathsome faggot Lindsey Graham.
US senator calls for assassination of Putin
The article linked is from Russia Times so I did my due diligence and checked the actual tweet on Twitter myself. Screenshot this morning by me: 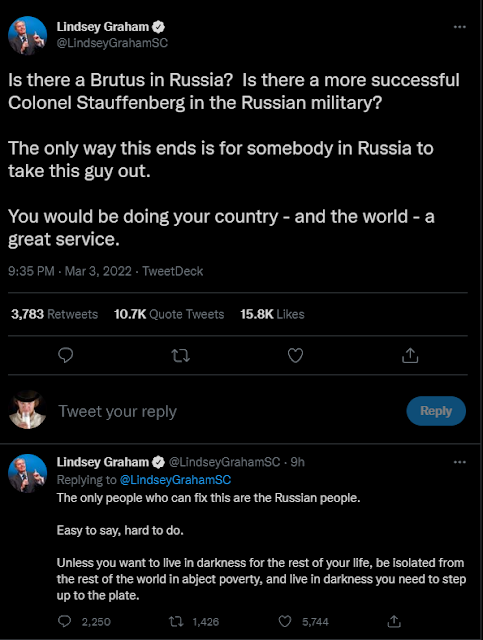 I tweeted this to Twitter Security and reported it as a call for violence but nothing will happen because as usual homo Graham is saying what the powers that be want him to say. 100% chance there are pics of this guy with teenaged boys somewhere because he is the very epitome of a political puppet.
A corpulent TV host is one thing, a U.S. Senator is a different matter indeed.
What would help would be if Americans wouldn't go lunging at the end of their chain like a junkyard dog every time some "news" story comes along. "They" are playing the emotions of the American people like a fiddle, whipping people up into a frenzy. Not just the idiot normies but lots of people who should know better than to be manipulated like this.
If you asked people two weeks ago about going to war to defend Ukraine from a Russian invasion, you would find only minimal support for that. Now, after two weeks of endless propaganda and bullshit? People pouring out Russian vodka and removing Russian players from sports video games? I bet you would find support for military action is growing quickly.
This is how wars start. This is how we were manipulated into entering World War I and then how we we were manipulated into entering World War II. You get the masses whipped into a frenzy by creating a villain (Spikey Helmet Mad Bad, Moustache Man Bad, Vodka Man Bad) and then convincing the American people that we have a "moral" obligation to smite them by sending our sons over to Europe to die in droves.
If we are lucky we will come out of this with our fragile economy wrecked and many people in America impoverished and suffering. If we aren't lucky? 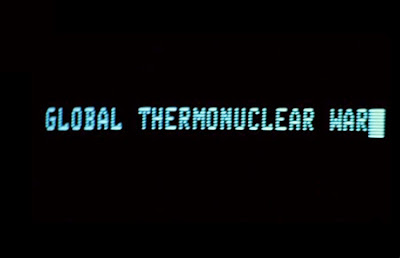