...our elected "leaders" are responding to the raging and unchecked inflation hitting every sector of the U.S. economy as any sane and rational group of people entrusted with running the U.S. Federal government would respond.
By making something that is already illegal (murder) and hasn't happened in any meaningful sense for over half a century a Federal crime. 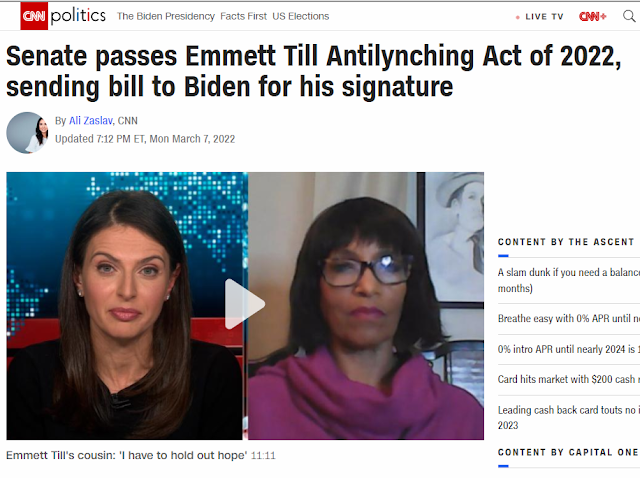 The bill is named after Emmett Till, a 14 year old black who was lynched in....1955.
1955
It is named after him because it is tough to find evidence of an actual lynching after 1955 and certainly not since I was born in 1971. Even Emmett Till wasn't lynched in the traditional sense of being hung, he was shot and his body was dumped in a river. I also suspect we are not getting the whole story when it comes to what happened to Till.
I wrote about this topic almost four years ago, Do We Need A Lynching Memorial And Is It Helpful?. My point was the same. There hasn't been a real lynching in America for many decades. On the other hand, blacks are being killed by the bushel in America every year. As I quoted in the above post, 1,400 more blacks were murdered by other blacks in just two years, 2010 and 2011, than were killed by lynching over an 86 year period from 1882 to 1968.
That post is prior to the Summer of Love in 2020 and the subsequent record setting year in American cities in 2021 when blacks were offing each other in enormous numbers. To quote from my 2018 post:
A young black man is under no serious, credible threat of being lynched in 2018. Nor was he in 2008 or 1998 or 1988. He really isn't in much danger statistically-speaking from  the cops either, in spite of the hysterical rhetoric, especially if he is not committing a crime. However a young black man is in a great deal of danger of being murdered in 2018 by another young black man.
That is a REAL problem and it is happening NOW, not more than 50 years ago.
There is a problem with blacks being killed in America, right now today, but it isn't from "lynching" but rather from rampant violence among a racial group that is responsible for the majority of murders and mass shootings in America. Not to mention all of the other problems in America, little stuff like an economy already in a tailspin about to get shot in the back of the head by foreign policy mismanagement.
Even with all of this going on, the U.S. Congress decided the real priority was to make it illegal to kill someone, even though it already is in every state of the Union, by means of "lynching" which hasn't happened in over 50 years.
With leaders like these, who needs enemies?
Posted by Arthur Sido at 9:50 PM