1 dead, at least 24 wounded in shooting at Dumas car show, authorities say
That is a big one by any standard. I am not sure if 25 people were shot or if some were injured in the chaos some other way. Dumas, Arkansas is a town of around 4,700 about 90 miles southeast of Little Rock. It is also very diverse... 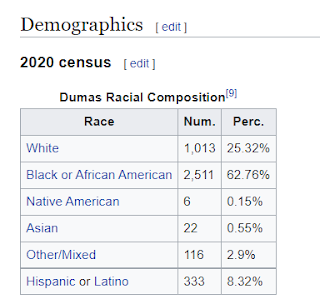 Dumas, AK is in the middle of nowhere in Arkansas but has a solidly black majority. That is one of the big differences between the south and north. You just don't see these small rural cities in the north that are majority black. The nearest town to us is Hicksville, Ohio with a population of around 3500. Hicksville is around 95% White and less than half a percent black. There also is virtually no violent crime.
The car show was called the "Hood-Nic" show and the organizer's, the "Delta Neighborhood Empowerment Youth Organization" featured promotional posters like this: 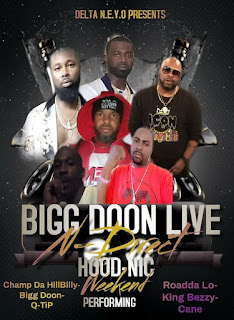 The pictures from the show and aftermath indicate it was a mostly black event.

This event has been going on for 16 years with apparently no major issues. Something has snapped in the black community, what self-control used to exist is gone and now every altercation devolves into gunfire. What is worse, there is no sign that anyone who could stand up and say enough is enough is doing so. Blaming Whitey for your own people shooting each other is a certain recipe for more shootings.
Posted by Arthur Sido at 10:12 AM