A quick check-in on my path to getting healthier.
Winter was a little rough, I didn't get out to walk like I had been since it was fucking cold all the time and often snowing and/or raining (like today, cold and snow on the ground). Short days, with extended periods of darkness make me lethargic and when I feel that way it is hard to keep from gobbling down everything in sight. I can say with some confidence that I didn't really gain any weight back but I also didn't really continue to lose weight and my conditioning suffered.
At the beginning of March we decided to invest in a membership at the local YMCA (local being 25 minutes away) and I have been hitting the weights usually every other day. Mostly I walk the elevated track for 5-10 minutes to get the blood flowing and then workout on the machines for 30-40 minutes and then cool down on the track for 5-10 minutes. I try to get in at least 45 minutes of exercise, today I did a solid hour between walking and lifting.
My biggest challenge is trying to remember that:
a) I am 50 years old, not 20
b) No one cares what setting I am lifting on
In my mind I am still the kid in high school who could bench press double my body weight but that isn't going to happen now so I try to work more reps at a reasonable weight setting instead of trying to impress people who aren't paying attention anyway and hurting myself. I am definitely significantly stronger than I was at the beginning of the month but I have a long way to go. I am not worried as much about losing weight at this stage, and more concerned with just getting stronger.
It can be tough to make myself take the time, especially when I spend 50 minutes round-trip driving to workout for the same amount of time, but fortunately my work schedule allows me to commit that time during the day when it tends to be a lot quieter at the Y. I also try to remind myself with this:
I have never regretted making the time to workout but I have often regretted it when I don't.
Simple as that. Every day you get stronger or weaker, especially in the latter stages of middle-age.
It also helps to see stuff like this: 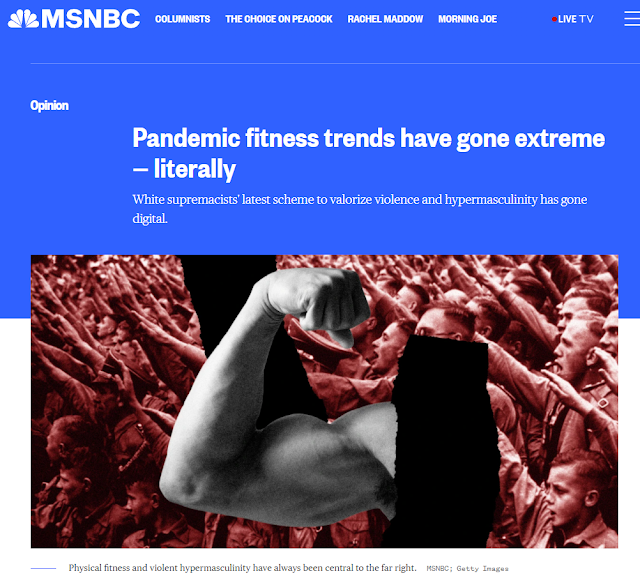 Who knew that not being a fat lazy fuck was LITERAL FASCISM!
Earlier this month, researchers reported that a network of online “fascist fitness” chat groups on the encrypted platform Telegram are recruiting and radicalizing young men with neo-Nazi and white supremacist extremist ideologies. Initially lured with health tips and strategies for positive physical changes, new recruits are later invited to closed chat groups where far-right content is shared.
Physical fitness has always been central to the far right. In “Mein Kampf,” Hitler fixated on boxing and jujitsu, believing they could help him create an army of millions whose aggressive spirit and impeccably trained bodies, combined with “fanatical love of the fatherland,” would do more for the German nation than any “mediocre” tactical weapons training.
So you can join the far-right where we believe in fitness and health, physical and mental, or you can join the fatty far left and be this: 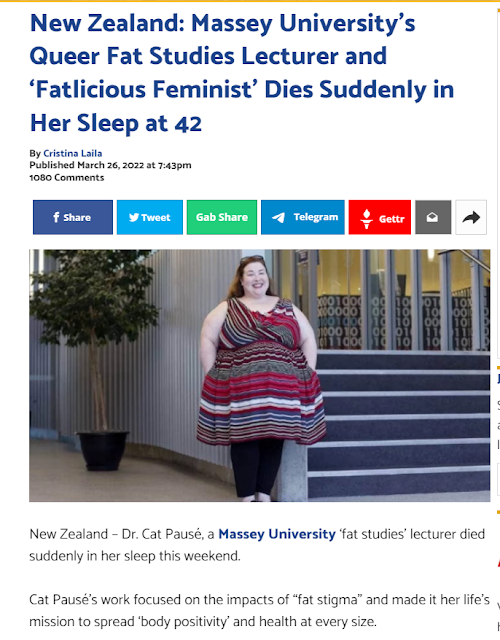 Wow, fat and insane. Awfully tempting!
Huh, I think I will choose to be as fit as possible and try to avoid dropping dead from being a lard ass with an enlarged heart at 42.
The MSNBC article ended with this:
The realm of online fitness now provides a new and ever-expanding market for reaching and radicalizing young men; and it requires our targeted focus and resources to try and stop the cycle.
I believe that is absolutely true and young White men especially are very open to the ideas of the "far-right". When you look at the world they are inheriting and the state of most young White boys and men, there is a real opportunity here. The elites offer them a world of being fat and unhealthy, lonely losers who live for porn, weed and video games, cowering in fear of being called names and blamed for things that other people do to themselves. We need to offer them an alternative that is healthy. You feel a lot better after an hour of working out than you do after an hour of playing video games. I am quite confident that if young White men and women would spend more time exercising, their need for anti-depressants would plummet. That is certainly another reason why this scares the Left.
Sure I am not getting in shape just to give the finger to the Left but it is a nice bit of icing on the cake.
More to come.
Posted by Arthur Sido at 1:40 PM