Knowing Our Enemy: The Handmaid's Tale

The next book I slogged through to get a better understanding of the thought process of our enemies is Margaret Atwood's The Handmaid's Tale. This is supposed to be a "chilling dystopian" look at a future where White supremacist men take over America and turn women into servants, with some becoming breeding stock for powerful White men. It is the sort of silly book that unattractive feminists like, man-hating and checking all the leftist boxes, written by one of their own, an unattractive feminist. 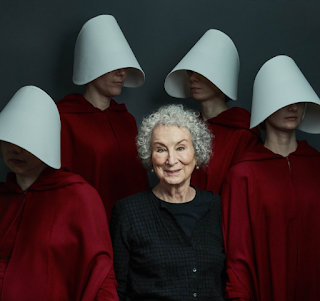 Written in 1985 it came to prominence again with a TV series and then a bunch of loony broads dressed up like Handmaids protesting during the Brett Kavanaugh hearings, terrified that they wouldn't be able to murder their children in the womb. I like me some dystopian novels so I thought I might give it a try and wow was it terrible. Below is my review that I left on Goodreads, hopefully it will serve to trigger some homely girls who profess to love the book while secretly wishing they had a man around to make them sex slaves.
*****
The Handmaid’s Tale (THT) can be summed up in one word: silly
I could excuse the book being silly if it was at least entertaining. There are plenty of authors who load their works up with leftist politics, ominous warning about “THE PATRIARCHY!” and various “progressive” causes du jour but still manage to write compelling stories. Atwood can’t even manage to do that. THT is grim, disjointed and tedious. By the end I was hoping they would catch Offred in the act and summarily execute her, something that would have been a mercy to both her character and the reader. The villains are cartoonish and clumsy, the heroes are shallow and uninteresting. The plot meanders around with far too many internal dialogues that do nothing to advance the story. It feels less like a novel with underlying political themes and more like someone made a checklist of talking points and then slapped a story around them.
When Atwood wrote THT in the mid 1980s her premise was risible but reading it now in 2022? It is laugh out loud absurd. All of the bogeymen she invokes are alive and well but on the other side of the political spectrum, namely on her side. Even pointing at Trump for vindication would indicate a lack of basic observational skills. Despite the villainous Orange Man Bad caricature portrayed by the media, Trump governed as at best a moderate Republican and nothing at all like an actual right-winger. Meanwhile America’s political and cultural direction has been charging headlong to the political Left. Keeping pace with this political movement is an environment of increasing authoritarianism championed by the Left with enthusiasm that puts the Religious Right of the 80s to shame.
At least THT provided another glimpse into the mindset of the sort of people who dress up like Handmaids to protest Supreme Court nominees, a glimpse that is both depressing and chilling.
Posted by Arthur Sido at 11:00 AM