It Shouldn't Need To Be Said

But apparently it does.
Believe it or not, semi-lucid adults can hold more than one viewpoint at a time. For example you can believe....
- Russia's invasion of Ukraine was ill-advised for a number of reasons and is an act of aggression that is leading to the loss of innocent lives.
...while also believing....
- Russia has been the subject of years of maneuvers by Western powers intended to back them into a corner. Like for example agitating for Ukraine to join the NATO even though the entire reason for NATO to exist in the first place ended 30 years ago, thereby threatening to put an openly hostile military alliance right on the doorstep of Russia and cutting off access to the Atlantic via the Mediterranean Sea. There is no legitimate reason for NATO to even exist in 2022, much less be inviting additional states to join.
Those two beliefs are not mutually exclusive at all.
In other words, recognizing that Russia has legitimate and reasonable concerns about Ukraine joining NATO does not make one a shill for Putin, nor does it require anyone to cheer Ukraine's degenerate "president" Volodymyr Zelenskyy as some sort of mythical heroic archetype. I can say Russia shouldn't have invaded Ukraine but at the same time say the U.S. and NATO shouldn't have been threatening Russia by dangling membership in NATO for Ukraine. It was intentionally provocative and who woulda thunk it, being provocative ended up provoking Putin.
There are plots within plots in this whole charade and the propaganda is off the charts. Unfortunately too many people including people on /ourside/ are getting suckered into it. Stop it. You are getting manipulated by the same people we all rail against all the time. Getting played like a fiddle isn't holding a principled position.
Like I said, it shouldn't need to be said but apparently it does. Vodka Man Bad isn't an argument. 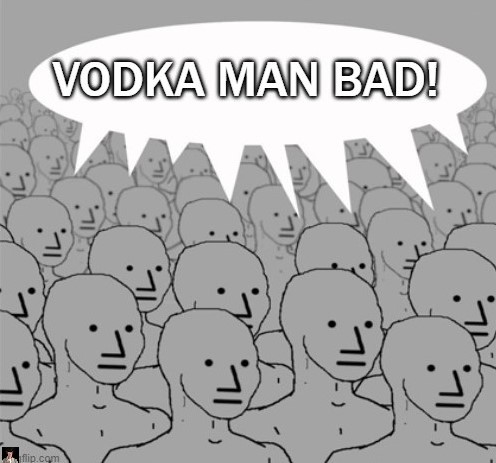