It Depends On How Much S Actually HTF

With commodity prices racing higher, causing the specter of inflation to become even more prominent than it already was, there has been renewed interest in precious metals. Metals have long been a hedge against inflation for a variety of reasons, mostly because it is generally accepted that gold, silver and other precious metals have an intrinsic value. A dollar bill only has value insofar as we say it does. Otherwise it is just a rectangle of paper with some writing on it.
Precious metals are also something that might be useful in a civilizational collapse scenario. I included it in my post The Four Gs Of Investing In 2020 along with ground, guns and grub. It ought to be clear that I think that precious metals have a place in your preps for a variety of reasons (none of which ought to be construed as investment advice).
However there is often pushback from some folks when it comes to precious metals and it usually is some variation of "what good will silver or gold be if there is a total collapse?". The thought being that only items of practical, immediate utility will have any value. Who would trade food for an ounce of silver? Well that really depends on just how much shit actually hits the fan.

If we know anything for sure about what the general collapse will look like, what will precipitate it and what will replace the current order, it is that we actually know almost nothing. No one does. Sure we can speculate and that is fun but all of it is just conjecture.
There are of course various historical examples: Rhodesia, Rwanda, Yugoslavia, the break-up of the Soviet Union and Warsaw Pact, the fall of Rome. All are useful but none really are equivalent. The size and social complexity of America make our impeding collapse unique.
How the collapse looks in western Nebraska is going to be far different compared to the collapse in Atlanta. Likewise, people living in the northern states will have a different set of problems than people living in the deep south or the southwest.
My point being that we don't really know what to expect in a TEOTWAWKI scenario. That doesn't stop people from speculating on what will or won't be useful.
I often hear people say that precious metals will be useless in a collapse because people won't see the value or if they do they will simply try to take your stash by force. In some scenarios that is probably true. In others? It is completely inaccurate.
There is a spectrum for how things might shake out, from a slowly developing situation where centralized control gradually collapses, leaving the U.S. as a vast territory of mostly autonomous zones, all the way to post-weapons of mass destruction annihilation of the vast majority of the country.
If there is a general but mild breakdown, and the banking system becomes unreliable? People could very well be willing to trade some goods for silver, maybe not food but you need more than food to live a semi-normal life. What about a Balkanization, where the fiat currency of the U.S. no longer is legal tender? Just because we have had a particular system for what seems to be a long time doesn't mean it has always been that way nor that it will always stay that way. It was less than 89 years ago that President Franklin D. Roosevelt signed Executive Order 6102 banning the private ownership of any significant amounts of gold. Sort of sounds like Palpatine commanding the clones to execute order 66. 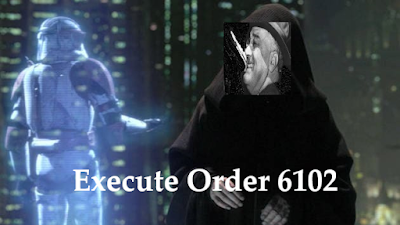 Government overreach didn't start with Obama.
In a SHTF scenario, barter will be important but precious metals have always had a place in less "advanced" systems. Understood in historical context, our modern economic system is an anomaly in human experience. For thousands of years before fiat currency, debit cards and checking accounts people still needed a way to transact business and one of the most accepted ways was to use precious metals as a medium of exchange. It was a better way to represent stored value of labor than showing up to buy something with a hopper wagon full of grain.
For me silver is a smarter choice than gold. I can get over 75 one ounce silver coins at current spot prices for what I would have to pay for a single ounce of gold. Maybe gold is a better choice for investment but as a SHTF medium of exchange I think silver makes more sense. Not investment advice, et cetera.
Of course as with all preps, you need to have any precious metal secured and you need to be prepared physically and mentally to protect it but that is true for precious metal or food storage or ammo or anything else you want to have and keep if the grid goes down.
If we are in a desert wasteland situation with roving warlords and Australian guys in souped up cars? Silver and gold won't be much use but you probably won't be alive anyway. I am focused on surviving in a setting where survival and eventual rebuilding is possible. If all you are doing is staying alive until you make a mistake and get eaten by cannibals, that isn't much of a life is it? The prospect of dying isn't that terrifying to me but rather what motivates me is protecting my family and the prospect of building something new from the ashes for the future.
Because we just don't know how or when things will be down, it makes the task of preparing a lot harder. If I knew with certainty that the end would come in this way, at this time, in this place, my preps could be tailor-made for that scenario. But I don't, and you don't and none of the internet "experts" know either.
So it becomes incumbent on the prepared citizen to have options and contingencies for a variety of scenarios. One of those options might be having a supply of precious metals on hand. While I wouldn't make it your primary prep, nor would I ignore it entirely. Life after it comes apart won't be like an 80s survivalist novel with endless gun fights, mostly it will be trying to recreate a semi-functioning society on a local scale.
The more you prepare for, the better your chances of surviving and thriving.
Posted by Arthur Sido at 7:00 AM