From The "Things I Didn't Know" Files

This was an interesting article from Springfield Armory on the history of the Browning Hi-Power being used by LITERAL NAZIS!
NAZIS, NOMS DE GEURRE AND THE COMPLEX HISTORY OF THE HI-POWER
Tip of the hat to The Tactical Hermit. 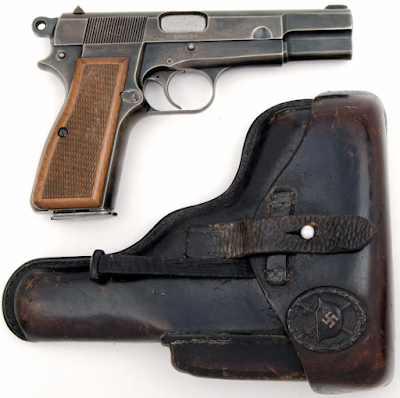 The Hi Power is of course the brainchild of John Moses Browning, praise be unto him. I didn't know that it was originally designed for the Frogs and in French it was the Grande Puissance, which sounds like something you would find on a woman with low morals. Translated from Cheese Eating Surrender Monkey it sort of means "High Power". Did not know that. The Frogs eventually declined to adopt the 9mm Hi Power and instead went with something called the Pistolet automatique modèle 1935A chambered in the super popular 7.65×20mm Longue. You have heard of the Hi Power but the Pistolet automatique modèle 1935A? Probably not although apparently it was the precursor to Sig P210, which retains the ugly aesthetics.
Also did not know that the Krauts kept making the Hi Power when they occupied Belgium calling it the 9mm Pistole 640(b) and issuing it to the Waffen-SS and Fallschirmjäger, the paratroops of the Third Reich. 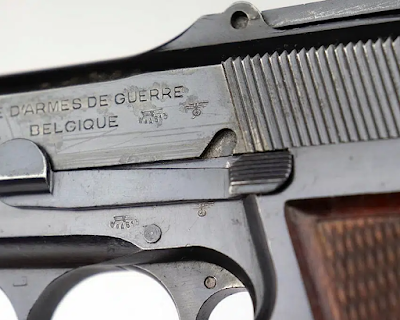 Of course the whole article, while interesting, is designed to be an ad for the Springfield SA-35 remake of the Hi Power but still interesting stuff. I have an SA-35 on backorder at one of my distributors, looking forward to eventually being able to check it out although stuff like that tends to end up in my safe in my collection instead of being sold.
If an enterprising GI had smuggled home a dozen of these things from Germany and kept them in good condition, they would be worth a bundle now. I would imagine a nice condition Hi Power with the Nazi markings would sell for many thousands of dollars.
Anyway, just thought it was cool and wanted to pass it on.
Posted by Arthur Sido at 8:18 AM