As a lifelong political junkie I often find things fascinating that other (iow normal) people find incredibly boring and/or meaningless. It also means I can sometimes step back a bit and view things from a political standpoint instead of being caught up in the moment. Not always and never perfectly, let's be clear about that. Still, decades of watching the political scene has given me a sense of perspective about current events.
I was a baby when Vietnam was winding down so I missed the propaganda leading up to the U.S. involvement in that fiasco. When Iraq invaded Kuwait in the "first Gulf war" I was a freshman in college and we weren't watching much TV and the internet was not in widespread use so we mostly got the news from the paper. But the "second Gulf war"?
That was the first major conflict for Gen X. When 9/11 happened in 2001 I was a few months shy of turning 30. I had 5 children and a promising career path in front of me. Like most Americans I got sucked right into the war propaganda. We were pissed and couldn't do much about it but here comes W. with his aw shucks pseudo-folksy talk. He laid it out real simple for us. Either you is with us or you is agin' us! Refuse to play along and we will change French fries to Freedom fries. Take that cheese eating surrender monkeys! 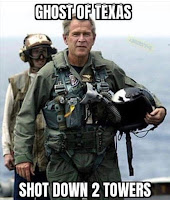 It wasn't until years later as the war in Afghanistan and Iraq dragged on that many of us wised up to the scam. Then we started to wonder if the whole thing was bullshit. Not that the buildings didn't come down but all of the "facts" about the events of that day seemed to be pretty sketchy. Like any number of other historical events, from  the Las Vegas shootings to Events That Must Not Be Named, I don't know for sure exactly what happened but I am reasonably sure that what they told us isn't what happened, or at least not all of it.
The two decades long events of 9/11, from the Axis Of Evil speech to the disastrous withdrawal last year, have hardened my heart and raised my natural skepticism levels to all new heights. Maybe not consciously but I pledged to follow the sage advice of The Who and declared that I won't be fooled again. That doesn't mean I never get fooled, I still catch myself all the time slipping, but at least I know how prone we all are to get suckered in and am watching for it.
Less than 7 months after the fall of Kabul to the Taliban, we find ourselves being drawn into another war, and this time not against some goat-humpers with 30 year old Soviet rifles but with one of the largest and most technologically advanced militaries in the world. It is a fascinating process. A couple of weeks ago you would have been hard pressed to find any support for getting involved militarily in Ukraine but thanks to weeks of non-stop propaganda, you start to see stuff like this:
EXCLUSIVE Americans broadly support Ukraine no-fly zone, Russia oil ban -poll
...Some 74% of Americans - including solid majorities of Republicans and Democrats - said the United States and its allies in the North Atlantic Treaty Organization should impose a no-fly zone in Ukraine, the poll found.
Three quarters of American polled, and polls are notoriously easy to manipulate, are in favor of using NATO warplane to prevent Russian air operations over Ukraine. Here is the kicker:
It was not clear if respondents who supported a no-fly zone were fully aware of the risk of conflict, and majorities opposed the idea of sending American troops to Ukraine or conducting air strikes to support the Ukrainian army.
Want to bet that the pollsters didn't pose the question with that in mind? To keep the skies clear over Ukraine would mean engaging the Russian air force and that invariably would mean someone getting shot down on one side or the other, or more likely a bunch of planes being shot down on both sides. If Russians shoot down NATO planes, that could be the pretext for escalation on our side, and if NATO jets shot down Russian planes, it would likely spark a fierce reaction from the Russians. So why would people support a no-fly zone by such a wide margin?
Propaganda. Mainstream news sources and social media alike are wall to wall Vodka Man Bad. Any story that paints Russia in a bad light is given immediate credence. People on the Left are willing to believe it because they think Russia = Trump. People on the Right believe it because their media sources are telling them how awful the Russians are. This is a screenshot of the most recent videos from the Fox News Youtube channel as of this morning: 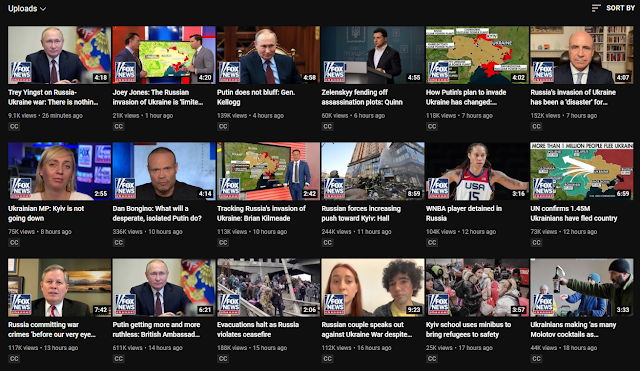 The most recent 18 videos are all about Ukraine. If I recall you had to go down to almost the 30th video to find a single clip about something else, and then it went right back to Ukraine. Other than Tucker, every video they put out is anti-Russian. Other mainstream normiecon outlets like Newsmax are uniformly in lockstep with the propaganda agenda. Republican congressmen are retweeting poorly photoshopped gag tweets about Sam Hyde and Republican Senators are calling for the assassination of Vladimir Putin.
The slow shift of public opinion on this issue is happening right before us in real time. While there are plenty of voices out there pointing out how people are being manipulated, for the most part the people seem pretty content to be told what to think and how to respond. They almost seem to like being manipulated because it saves them from having to think about something. They can just adopt whatever position they are told to, change their profile picture and then return to whatever form of mindless entertainment they prefer. 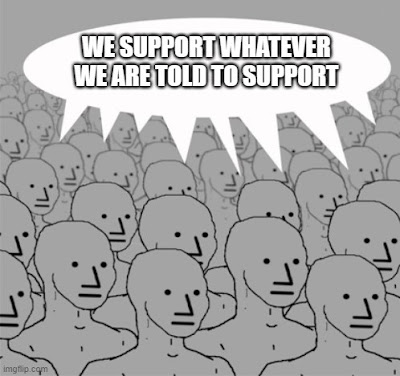 This also exposes one of the greatest challenges we face on /ourside/. As political dissidents, by definition what we are saying is well outside of the Overton Window of acceptable discourse. Not to pat myself and the rest of us on the back but to get to these positions requires a certain level of thought and willingness to consider more sides than what is being spoon-fed to the rest of us.
What I am seeing is a masterful example of public manipulation. If this war goes on a few more weeks, it is conceivable that you could see a majority of Americans supporting overt military actions against the Russians. Making a people who were war weary just last year and who ought to be suspicious of what they are hearing from government and media after two years of being lied to about Covid suddenly transformed into supporting a war against a militarily powerful, nuclear armed nation, that oh by the way supplies a lot of the world's oil and wheat among other commodities is, as the title of the post states, both fascinating and horrifying.
The lessons to take for political dissidents as we watch this latest manipulation of the people who make up the vast majority of our nation is that we simply cannot compete on even footing with the forces who are arrayed against us in the public sphere. We won't win this war by having better arguments, not even by having better memes. As is always the case for dissidents, our task is to fight and win on the periphery, using unorthodox means, and in our present circumstances "winning" mostly means surviving. Sharing memes back and forth is fun and encouraging but it isn't swaying the tens of millions of NPCs who blindly follow The Current Thing.
The efficiency and efficacy of the Ukraine propaganda is a sobering reminder of the magnitude of the task ahead of us. Being realistic and being practical need to be our watchwords. Going head to head with Leviathan will get us squashed, we need to learn to be sneaky.
Posted by Arthur Sido at 1:08 PM