INSANE: A teacher and students get into a fight in a Dallas middle school and throw chairs at each other pic.twitter.com/fhaqgEzIu9

What is it with Africans throwing chairs? Every time there is a brawl at some restaurant they pick up chairs and start tossing them. As you can see from the blood streaming down the subs face, a chair thrown by a middle school punk is a very dangerous thing.
School substitute teacher in DeSoto treated by paramedics after attack by middle school students, district says
The school cancelled classes to focus on "safety"
DeSoto ISD cancels class after viral videos show altercation with students, elderly substitute
According to that story, the substitute teacher is 73 so that is a pretty impressive throw for a man that old. The fight apparently started after "a disagreement over a box of tissue paper on his desk". Try to think back to your time in school, can you imagine a scenario where a box of Kleenex leads to an 8th grader throwing a chair at a teacher? It is hard to imagine this chaos when you read stuff like this:
Former Dallas ISD police chief Craig Miller, who now works as a security consultant, said he often sees escalations of threats or issues as campuses approach time off. Spring break was scheduled in DeSoto for next week.
“It is very important for school administrators to be aware of this trend and prepare the staffs at every campus prior to these breaks,” he said. “Many of the substitute teachers who work the days leading up to breaks don’t know the students in each class and, thus, don’t realize the triggers that certain students might have.”
Oh, poor baby! The 73 year old sub didn't know the "triggers". I would guess that the 8th grader would be triggered by just about anything.
What a human disaster that classroom represents but it is not at all surprising. From what I can tell, DeSoto is around 3/4 black and the rest is mestizo. From the Dallas Observer, In Dallas, White Flight Never Ends:
The change has been most dramatic in Dallas County's southernmost school districts: Cedar Hill, DeSoto, Duncanville and Lancaster ISDs. In 1997, DeSoto and Cedar Hill were majority white, Duncanville was nearly half (48.6 percent) and Lancaster was slightly under a third (31.2 percent).
DeSoto is now 3 percent white, having lost 91 percent of its white population. The number of low-income students, meanwhile, has quadrupled: 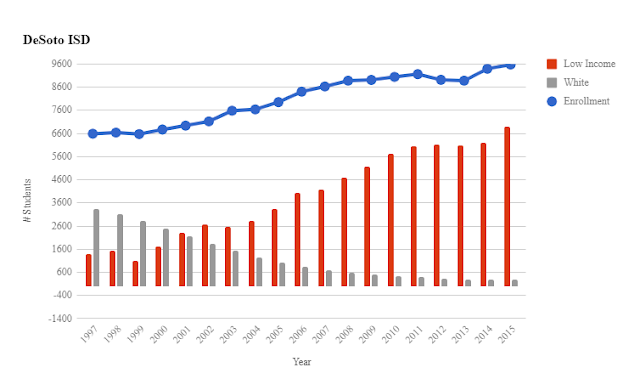 Gee, with videos like the one at the top, why are Whites "fleeing" these school districts? You can leave your White kid in these schools where they will no doubt be subject to bullying and outright violence or take them somewhere they can actually try to learn and hopefully not die. That isn't a tough decision.
It isn't just White students fleeing these insane asylums/zoos...
New Texas teachers leaving the job most after their first year, study says
Look at this chart from that story: 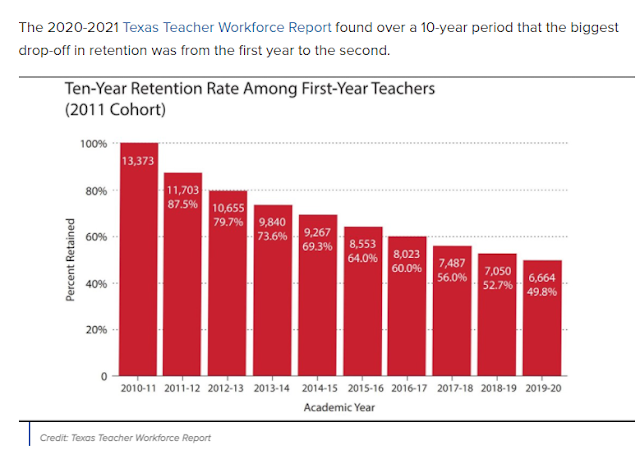 Less than half of new teachers come back after the first year. That might be kind of a problem. Of course the article blames it on Covid and insufficient pay. No, I am serious. The article is from January so they didn't know to blame it on Putin.
No mention of the impossible task of taking some idealistic 22 year old White girl with a new education degree getting dumped into a sea of violence and stupidity and trying to teach those animals. They get paid plenty to work 8 months of the year but no amount of money is worth having some little asshole throw a chair at you. I wrote about something similar in 2020, "Journalism", and included this quote:

My assumption is that black kids are suspended and arrested more often because they are committing serious infractions deserving of suspension or arrest more often. There is a reason that teacher turnover is so high in urban schools compared to suburban and rural schools. A few years back a news story was running about St. Louis public schools suing 32 teachers for quitting mid-year. The attorney for the teachers responded:Attorney Emily Perez said the contracts are not enforceable and suing to collect the $3,000 is unfair to the teachers because they faced stressful, toxic and even unsafe work environments.Other reports surrounding this situation cited one teacher who was punched in the face by a student, and the student didn't face any disciplinary action. These sort of incidents are pretty common and occasionally videos surface.

By the way, St. Louis Public Schools are around 80% black...

When being a teacher is so awful that you have to threaten to sue new teachers to keep them from leaving.
This is another example of the demographic disaster that is unfolding in American urban areas and slowly spilling out into the rest of the country. What are the odds of an 8th grader who throws a chair at a 73 year old teacher not turning into a violent criminal who either kills someone else or is killed before his mid 20s?
The next 10 years are going to be great as the festering swamps known as urban schools vomit fledgling criminals out into society with no discipline, no education, no marketable skills but with a huge chip on their shoulders.
This is only going to end one way.
Posted by Arthur Sido at 12:55 PM