American Renaissance ran a piece last week looking at The Color Of Murder In Toronto. The results were as unsurprising as you might expect.
Out of the 35 perps with names and photos (minors have their identities protected), only two are white — even though roughly half the city is. It’s another reminder that racial behavioral patterns are universal.
Well who woulda thunk it?
As is my policy, I went to check it out for myself at the webpage of the Toronto Police. Sure enough... 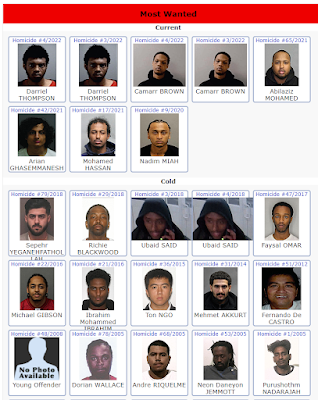 This guy might be innocent of murder but he is guilty of having horrifying hair. 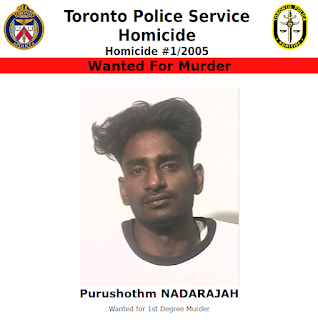 That is quite the traditional Canadian name, descended from Canada's founding stock no doubt.
You have to scroll at the way to the bottom to find the two White people on the list. The murders committed by Rosaleen Wallace and Dennis Howe occured in 1987 and 1983 respectively. Rosaleen Wallace apparently didn't provide adequate care for her 5 year old son who suffered from Hirschsprung’s Disease and is wanted for his death but has never been found. Howe murdered a 9 year old girl named Sharin’ Morningstar Keenan, found stuffed in his fridge. He likewise disappeared but would be in his 80s now. He also was reputed to be a heavy smoker so odds are he is long dead.
At the Toronto PD website you can click on the photo of each wanted murderer and see their victims. I didn't go through all of them of course but the first dozen or so I looked at were, with the exception of one White guy, all some sort of black on black  (or brown on brown or some combination thereof) violence.
As the AmRen article notes, Toronto is just about half White but other than two White murders from 35 or more years ago, the entire most wanted list is either black, mestizo or some sort of South Asian. Makes one wonder, would Toronto have any murders at all if the city was 100% White? Since Toronto already has a very low murder rate and the murders they do have seem overwhelmingly to be committed by non-Whites, it seems reasonable to assume that absent their diversity Toronto's murder rate would be similar to that in Tokyo, a city that has such a low crime rate that it doesn't even get mentioned on their Wikipedia page.
I guess violent crime is just a small price to pay for the glorious advantages of diversity.
Posted by Arthur Sido at 11:09 AM