By whatever measure you use, Indiana is one of the deepest "red" states in the Union. At last check every statewide office is held by a "Republican" and the GOP has huge majorities in both chambers of the State House. The Republican primaries are the de facto general election in many races and often you get someone who happens to stumble into a role and become permanent because no one opposes him/her in the primary and the Dems barely make an effort to run anyone against them. This is the case in my Congressional district where our empty suit Representative, Jim Banks, is completely useless but no one seems able to shake up the primary voters to replace him and the Democrats generally run a mentally ill kook against him with zero support.
It also means that most conservative voters pay little attention to local and state politics because they just assume that Republican control means the government will do what they want. That is rarely the case and it highlights one of the major problems with living in a deep red state. Sure we don't get most of the overt bullshit you see in California and New York but we don't get a lot of what we think we are getting because the average normiecon is content with seeing the letter "R" after a politician's name. A great example is Jennifer McCormick, the "Republican" State Superintendent of Education in Indiana. I posted about her a couple of times:
Thank Goodness For The GOP!
and
More From Jennifer McCormick
Jen is all about gay rights in Indiana schools and almost exclusively follows Democrats on Twitter, which makes sense since all of her positions seem to come right from the Democratic platform. How does she win a statewide office in deep red Indiana? She just calls herself a Republican and sucks off all the right people (metaphorically of course), gets on the ballot as the Republican and coasts to a win thanks to straight ticket GOP voters. Our governor is likewise pretty useless but he is the Republican so he wins by a landslide.
That brings us to the issue of "constitutional carry" in Indiana. The Hoosier state is one of the most gun friendly in the country, with only the barest bones of regulations. We also have one of the highest percentages of concealed carry permits in the country and just recently eliminated the fees for getting your permit. So constitutional carry, or concealed carry without the requirement for a license, should be a slam dunk. It is widely popular in the state and has plenty of backing in the legislature. However it is once again stalling in the state assembly.
Three "Republican" State Senators joined with Democrats to basically eviscerate the provision, Liz Brown from nearby Fort Wayne, Mike Bohacek and Susan Glick. No surprise that two of the three turncoats are women. David Codrea has a good write-up about this for Ammoland: ‘Only Ones’ & GOP Turncoats Derail Indiana Permitless Carry and does a great job showing how ridiculous it is to label cops as the only ones professional and competent enough to carry firearms.
Refusing to give up, a number of Republicans have revived constitutional carry and are pressing forward once again. That has raised the ire of Indiana's State Police Superintendent Doug Carter. He is quoted as saying:
....if lawmakers “support this bill, you will not be supporting us.”
Oh, supporting the cops and "backing the blue" now means only voting the way they tell us? I think we call that a "police state" and that is supposed to be bad. 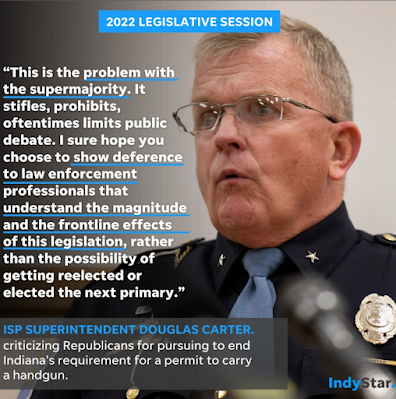 Of course the handful of Indiana Democrats jumped on board with Doug's asinine comments. Talk about biting the hand that backs you.
Which party supports the police, at least rhetorically?
The Republicans.
Which party is endlessly talking about "defunding the police"?
The Democrats
Who are the most supportive people when it comes to law enforcement, the people with Back The Blue and FOP stickers on their cars?
White conservatives.
Who are the All Cops Are Bastards (ACAB) and bLM types?
Not White conservatives.
It kind of makes you feel stupid for backing the cops when the top cop in Indiana thinks you shouldn't be allowed to carry a firearm to protect yourself and your family without permission.
Let me break it on down for you Dougie:
If you make me choose between my natural human right to self-defense, codified in the 2nd Amendment, or "Backing The Blue"? I will choose my rights all day, every day, and twice on Sunday.
The "gun violence" problems we have in Indiana are not from law abiding citizens carrying firearms without permits, we have a ton of people with carry permits including yours truly. The problem we have with gun violence is almost exclusively blacks shooting each other, and a significant percentage, perhaps a supermajority, of those shooters aren't legally allowed to carry with or without a permit.
People in Indiana are generally law abiding, pleasant people who respect authority and back the blue. The people who are causing the problems are generally unpleasant people and don't back the blue. It might be smart to not piss off the people who support you Doug, because that might backfire when you really need our support. 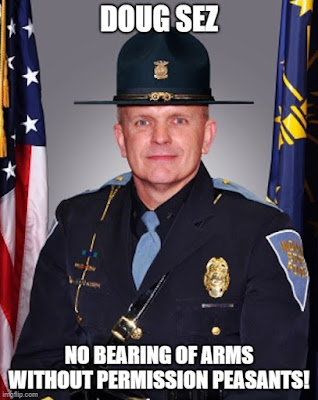