Apparently the Oscars, aka the Academy Awards, were on last night and it featured a new twist: a live chimp out. 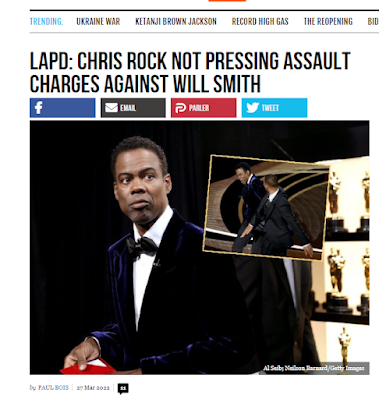 The Academy Awards used to feature White people dressed up in fancy clothing, lots of narcissistic self-congratulation and painfully long acceptance speeches.
More recently the Oscars featured degeneracy, political speeches and vulgar "jokes" for cheap laughs but never an assault.
My first reaction was that Will Smith didn't really hit him that hard but Chris Rock was a pussy for standing there and taking it. But then my bullshit alarm went off.
We have seen endless kabuki theater for most of my life, and worse recently from the "pandemic" (remember videos of people keeling over in China from Covid?) to the Ukraine war propaganda that is 99.8% bullshit. Why would this be any different?
Will Smith and Chris Rock are both actors, Rock doesn't get nearly enough credit for his heart warming portrayal of a crackhead in the powerful drama "New Jack City". One thing they learn as actors is how to fake hitting someone. That makes me suspect that this whole "fight" was staged to drive viewers for next year. Given how dismal the ratings have been, what better way to get viewers next year:
Tune in to see which black guy assaults someone!
Maybe it was "real" but in 2022 the odds favor it being staged.
Everything you see is fake and gay. Don't forget that.
Posted by Arthur Sido at 8:26 AM