It is a comparison that is often overdone but it really seems to be more and more accurate each day. We are seeing Weimar style inflation and soon the instability that accompanied that inflation.
Inflation accelerates 7.5% in January, hitting a fresh 40-year high
Hoo boy, and the real inflation number is far higher. That is the lowest number they could publish without getting called out on it.
Inflation surged again in January, notching another four-decade high as strong consumer demand and pandemic-related supply-chain snarls fueled rapid price gains that wiped out the benefits of rising wages for most Americans.
The consumer price index rose 7.5% in January from a year ago, according to a new Labor Department report released Thursday, marking the fastest increase since February 1982, when inflation hit 7.6%. The CPI – which measures a bevy of goods ranging from gasoline and health care to groceries and rents – jumped 0.6% in the one-month period from December.
This chart is startling... 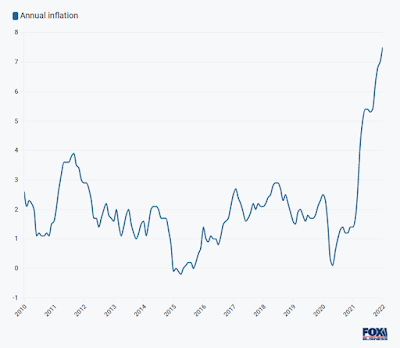 For most of my adult life inflation has been under 5%, often under 2%. That changed last year and I for the life of me can't figure out why.
Most people don't seem to be able to connect the dots. They think things are great because their wages are going up in terms of dollars per hour but then can't seem to understand why they aren't getting ahead. Try to explain to the average normie that if his wages go up 4% but inflation goes up 7.5%, then he is losing purchasing power and effectively making less, even though the numbers on his paystub are larger. You will mostly be wasting your time.
They are going to have to do something soon or this is going to jack up the midterm elections for the Democrats and as usual the "solution" will likely involve printing more "money" to shower on the sheep in order to buy their votes, even though that will just make inflation worse. Or a war. Perhaps both. Either way the economic instability is approaching crisis levels. Normies don't understand much but even the dimmest bulb might understand that the Weimar inflation led to something very different. 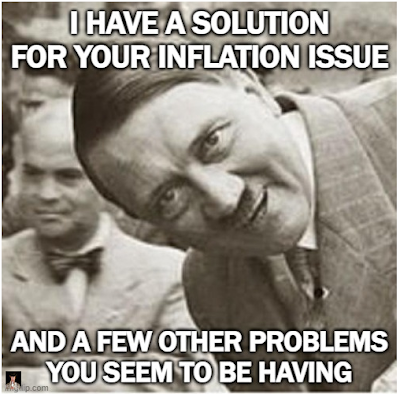