As World War II ended, the world was in tatters. Europe was destroyed, the Soviet Union had been badly hurt by the Reich, Japan was hammered and China was dealing with a civil war after a brutal occupation. Sitting all alone, mostly untouched and in the catbird seat?
America.
The end of the Second World War ushered in the Pax Americana, the peace ensured by America. Sure there has been precious little actual peace since 1945 but most of the Western world has prospered quite nicely in the interim between 1945 and now. America, Western Europe and Japan became wealthy, advanced nations.
As Eastern Europe emerged from the Iron Curtain they saw a world that had left them behind. We had Levi's and nice cars and color TV, they had crappy cars and awful clothing. It has been an ugly and sometimes violent reintroduction of Eastern Europe to the world created by their Western cousins.
With the Soviet Union gone, there really was no military force on Earth that could compare to the U.S. and that has been the reality for most of my adult life. While we struggled with insurgent wars, none of the larger nations would mess with us and our overwhelming superiority in carriers, nukes and technology. Europe had two major conflagrations over the course of 30 years but was mostly peaceful in the 75 years since. This is true in large part because of the Pax Americana that promised overwhelming force in response to an attack on any of our allies. If a nation stepped out of line, like Libya for example or Iraq, we would smash them flat with overwhelming force. No despot wanted to be the next Kaddafi or Saddam Hussein. We kept the peace.
As the world woke up this morning and "President" Joe Biden stayed in bed until lunchtime it became clear:
The Pax Americana is no more. 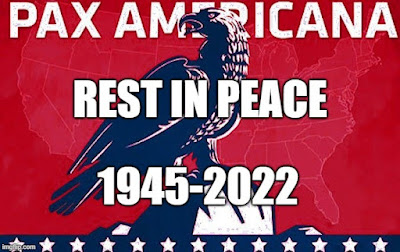 What that means for us in America is that the world is about to change and we are not going to be in control of how and when it changes.
While I didn't and don't have any interest in picking sides in the Russia-Ukraine conflict, it is without question that this never would have happened in the recent past. This is a different America today.
In truth this has been going on for a long time. Reagan for his faults was the last strong President we had. His successor George H.W. Bush was an out of touch pussy. Bill Clinton was a buffoon who couldn't stop chasing tail even in the White House. George W. Bush was an imbecile and an evil imbecile to boot. Obama was and is a globalist puppet. Trump was a loud mouth and braggart who was led around by the nose for four years.
Biden is different. At least Obama would have been on TV last night condemning the attack on Ukraine. He wouldn't have done anything but he would have been visible. Biden disappeared, went to bed and finally emerged this afternoon after a nice bowel movement that apparently required his full attention all morning.
The world saw clearly what it had long suspected. America is a hollowed out shell, a paper tiger. We are gutted internally and are completely leaderless. Our "President" is an elderly man suffering dementia who was pretty dumb even when he was younger. The VP is a literal whore that no one likes or takes seriously and everyone is trying to force out. Next in line for the Presidency is Nancy Pelosi, a decrepit old gin hag who is sloshed during every waking hour. The guy after that is the Senate president pro tempore, Senator Patrick Leahy who is a sprightly 81 years old. He took office in 1975 when I was 4 years old and has been lurking around ever since.
America isn't over quite yet, we still have a ton of military firepower and the small matter of thousands of nukes (that we hope would work if we launched them). But our run as the world's only superpower is over and everyone knows it.
What will replace Pax Americana? No idea but it will likely be multi-polar in nature with a growing dominance in the Russia-China alliance of convenience. Western Europe will begin to rearm, as will Japan, as they no longer feel confident of the protective umbrella paid for by the U.S.. In other words, we will be getting back to where we were on the eve of World War II. That worked out well for everyone, a bunch of nations armed to the teeth and eyeing each other.
Whatever happens we are in a new world order, although maybe not the one George H.W. Bush envisioned. Then again, maybe it is. Either way, we are witnessing the twilight of the Pax Americana and the end of the American century in real time. What comes next will almost certainly be worse for regular Americans and the world.
Posted by Arthur Sido at 6:08 PM