Welcome To Haiti 2.0: Now With One Billion Guns!

In 2011 I went on a "mission trip" to visit the island nation of Haiti about a year after the earthquake that destroyed so much of the country. I wrote pretty extensively about the experience on my old blog. When I figure in airfare, the trip expenses and the money I donated both before and for years after my trip, my financial investment in Haiti comes to a couple grand.
It is more than a decade after I went on this trip and things are in some ways even worse in Haiti. Just last year Jovenel Moïse, the latest "President" of Haiti was assassinated and in October a group of 17 American missionaries with Christian Aid Ministries were kidnapped and held for ransom, before eventually escaping in December. It is a disaster that never ends, like a perpetual car crash repeated over and over.
During that decade since my trip the world, most significantly White Christians in America, has poured untold billions in aid and manhours into trying to help this country achieve some semblance of civilization. It has been in vain. The problems in Haiti are not economic or political, they are demographic.
The only real industry in Haiti is the orphanage-industrial complex, and it is mostly a farce as the overwhelming majority of "orphans", around 80%, have at least one living parent. But orphanages are money magnets. Slap a churchy sounding name on your outfit, plaster pictures of little black kids on your website and add in a few heartstring-tugging stories and watch the money pour in. Some estimates are as high as $100,000,000 annually being dumped into a country with a GDP of under $20 billion annually, with 90% of government revenue coming from some shady "treaty" with Venezuela called Petrocaribe. Apparently this deal allows Haiti to borrow oil and sell it with the promise to return the oil later on but as is always the case in Haiti, the political class has been robbing the fund blind and none of the promised benefits to the Haitian people ever materialized, leading to massive rioting a few years ago. This is the same story over and over as a new President comes into power, promises reform and then loots the foreign aid sent by gullible White people.
Meanwhile the "orphanage" system is rife with abuse. The same outfit that had missionaries kidnapped last year, Christian Aid Ministries which is an Anabaptist group (Mennonites and Amish mostly), had a missionary named Jeriah Mast who was molesting Haitian kids (and it later was discovered the same guy was molesting Amish and Mennonite boys in Ohio) and leaders in CAM allowed him to keep serving and molesting. As an aside this is a significant problem in "conservative Anabaptist" groups because their closed nature often leads to trying to deal with sexual abuse "in house" and that seems to mean not dealing with it at all.
I don't consider the money and time I spent trying to help the Haitian people to be wasted because it provided a valuable experience for me to understand some irrefutable facts of human biology. But I also invested a lot of myself emotionally in Haiti and the dawning realization that I was trying desperately to convince myself that what I knew to be true was in fact not true and I should know better. This emotional investment is a major reason why I often return again and again to the subject of Haiti.
That brings me to the latest video from Jared Taylor and American Renaissance, I reuploaded it to Youtube below but if they nix it, and they might because Jared is pretty based in this video, here is the link to the original video on Bitchute.
If you prefer reading you can check it out here: Building Haiti Right Here in the United States. Money quote at the end of the article:
What happens when black behavior becomes the standard? You can coast for a while on the rules white people set up for themselves, but who wants to be the last chump to pay for groceries when everybody else is shoplifting? That way lies Haiti. Even people in El Salvador can see it.
I love that line, who wants to be the last chump paying for groceries? You can bet it will be a White person.
You might be jealous of my enriching experience in Haiti where other than other White missionaries I was the only non-black I saw for days on end. Don't worry if you haven't had a personal experience with life in a third-world country, the third-world is coming to you! 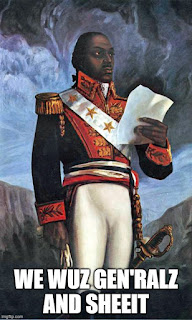 Haiti is considered the only nation to achieve a "successful" slave revolt. At the close of the 18th century, the Haitian Revolution freed the Haitian slaves and essentially emptied their country of Whites. Two hundred years later and Haiti is a basket-case, one of the worst places in the world by almost any measure. While the descendants of freed slaves in America have a standard of living unlike anything in any black-run nation and limitless opportunities, regardless of how rarely they make use of them, Haitians have been mired in an endless cycle of corruption, poverty and violence broken up occasionally by intervention from White nations.
As I have often said, the problem with Haiti is that it is full of Haitians. The few more-clever-than-average Haitians tend to find a way to grift from the donations of gullible Whites, in much the same way clever blacks in America gravitate toward careers in grifting like the clergy, "community activists" or corporate "diversity officers". The rest live lives of hopeless poverty and ignorance, and no amount of mission work or money will fix it.
The significance of Haiti as Jared points out is that our own country is rapidly taking on similar demographics but with a couple of added twists.
While Haiti is almost entirely populated by people of black African descent, the U.S. is turning into a hodge-podge of different demographic groups that come from a variety of the worst places on Earth: Africa, Mexico, El Salvador, South Asia, the Middle East. These groups all have proven unable of being successful in their own nations and all of them not only hate White people, they also hate the other groups that they see as competitors for the massive looting of the corpse of White America. In other words, all of the bad stuff from around the world inflamed by a racial mix that is incendiary.
Of course there is also the added bonus of a billion guns. While those guns are of little danger to anyone else in the hands of heritage Americans, as more and more new "Americans" get their hands on them, it becomes ever more likely they will be put to nefarious uses.
Import the Third World, become the Third World.
This is a truth that all of us are going to become quickly acquainted with.
Posted by Arthur Sido at 11:08 AM