The Rightest Man In America 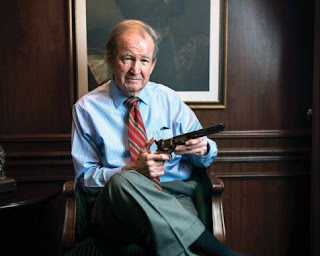 Being the smartest and most often correct person in American public life is a pretty low bar. If you have any experience with observing American politics for any length of time, you will know that it has been a rogue's gallery of idiots, perverts, scoundrel and devils. Even the Presidency has been marked by imbeciles and fools since the first Reagan admin. Talking heads on cable news and radio are little better than carnival barkers, with one exception. Is there anyone in American politics today that you would trust with something more important than the assistant manager job at a truck stop?
There is one name that stands apart for being right on most issues. One guy who was right at the time and has a knack for being proven right afterward. Over and over and over. That guy is one Patrick J. Buchanan.
Now Pat hasn't been right about everything and he doesn't talk about some of The Big Issues that guys on /ourside/ consider important, at least not as much as we might like. Pat is someone who has worked from within the system most of his life, even running for President a couple of times. He appears on TV and his columns used to be in major papers around the country. He was speaking to millions of people long before the internet and was using the basic language of America First long before Trump became a political power, and doing so more consistently and obviously more eloquently.
Pat is often forgotten in the hubbub of modern social media. He is an old school analog guy in a digital age. At 83 his days are coming to a close and it is easy to forget about him. At least until something actually serious happens and then he is proven right once again. Ukraine is the latest reminder that when the idiots on social media are spewing ignorance, you can almost always count on Pat to write brief, pointed pieces like this:
Did We Provoke Putin's War in Ukraine?
When Russia’s Vladimir Putin demanded that the U.S. rule out Ukraine as a future member of the NATO alliance, the U.S. archly replied: NATO has an open-door policy. Any nation, including Ukraine, may apply for membership and be admitted. We’re not changing that.
In the Bucharest declaration of 2008, NATO had put Ukraine and Georgia, ever farther east in the Caucasus, on a path to membership in NATO and coverage under Article 5 of the treaty, which declares that an attack on any one member is an attack on all.
Unable to get a satisfactory answer to his demand, Putin invaded and settled the issue. Neither Ukraine nor Georgia will become members of NATO. To prevent that, Russia will go to war, as Russia did last night.
While most "conservatives" are yammering about supporting Ukraine, a nation they couldn't locate on a map without assistance, and doing asinine stuff like this...
Ohio liquor stores to pull Russian-made vodka from shelves at direction of governor
....take THAT Putin!...
...Buchanan asks the question "Why did this happen?" and considers it more deeply than Vodka Man Bad. 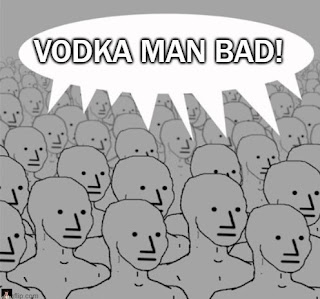 Even at his advanced age, he is still sharper than 99.9% of people who are paid to give their opinions on TV and the internet. It helps that Pat understands something of the historical context in Ukraine including this:
In 2014, a democratically elected pro-Russian president of Ukraine, Viktor Yanukovych, was overthrown in Kyiv and replaced by a pro-Western regime. Rather than lose Sevastopol, Russia’s historic naval base in Crimea, Putin seized the peninsula and declared it Russian territory.
More about this here by Eric Zuesse back in 2018 before most people were paying attention to Ukraine:
How and why the U.S. Government Perpetrated the 2014 Coup in Ukraine
The "democracy" in Ukraine that we are supposed to pray for and support doesn't have the same origin story as the U.S. but you would think that it did. Ukraine has had a super corrupt government pretty much since it was freed from Soviet domination but do you think it is a coincidence that 2014, the year of the coup, is also the same year that Hunter Biden was given a million bucks a year seat on the board of Ukrainian energy firm Burisma?
Back to Pat. He gets these issues, he does the basic research, he bases his takes on what he has learned, not on what will get the most clicks on social media. Pat is too old to worry about what Zoomers think about his opinions.
At his age he likely won't be around much longer and even as sharp as he is now, that can't last. Soon enough he will stop being a voice of reason and we will all be poorer for it. Will a new voice rise that can fill his shoes? 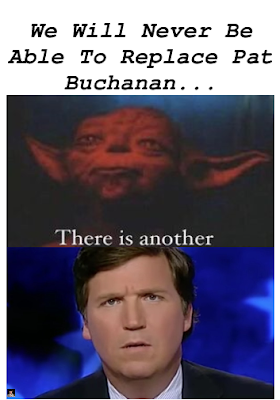 Maybe.
Tucker Carlson is not in the same league as Buchanan intellectually, although he is smarter than he lets on during his TV show. His is a contrary voice for the digital age. He does write and surprisingly well (see my review of his book Ship Of Fools) but his real talent is being on camera. Buchananites will bristle at the suggestion that Tucker is the heir apparent for Buchanan and I am not really saying that. Tucker still parrots back some critical talking points, like reducing race to "skin color", but who else is out there that will push back on the tide of current opinion and has the clout to take unpopular positions, as he has been doing on Ukraine? The Fox News Youtube channel has been a steady stream of cringe about Ukraine, mostly women crying and bullshit stories of heroism, but Tucker says things that gets the right people upset, both Republicans and Democrats alike.
Will Tucker be that voice crying in the wilderness like Pat? Maybe although in a different way. Regardless, if there are ever histories written about the late 20th and early 21st centuries and the authors are honest, they will recognize that Pat Buchanan was right far more often than not and we ignored his voice to our own destruction.
Posted by Arthur Sido at 8:58 AM